Wine and the wine trade 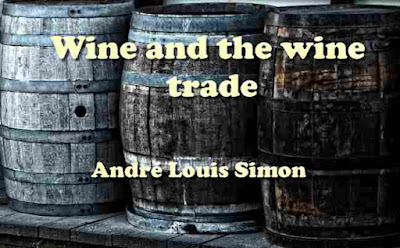 The accumulated store of knowledge which we have inherited from past generations is altogether beyond the power of assimilation of any single human brain. Yet what is already known to us is not sufficient to still our craving for more knowledge: on the contrary, our generation shall hand down to the next immensely greater treasures than it received.  (what about now 2022 )
We can never know enough: we may often know too much, but, if we do, it is because we do not know enough. Although it is as impossible as it would be unnecessary for any single person to comprehend the sum total of human knowledge, it is both possible and desirable that we should all apprehend at least some of the main facts to which the causation and effects of phenomena and objects in our everyday life are due or believed to be due.
There are only a few people who make it their business or their hobby to comprehend the making and regulating of clocks, but we have all learnt or heard enough about them to " apprehend " that if our watch stops it is that it requires either winding, or a new spring, or a drop of oil, but that it has not stopped as the result of some Malefice of the sorcerer's art,
Unscrupulous tradesmen may sell us clocks with pretty faces and bad works, but not watches without any works at all, such as those given to children in the nursery. The elementary knowledge which we all possess about watches is superficial and yet it is very useful. Did we all possess the same elementary knowledge about wine, the poisonous concoctions which masquerade under the name of wine would no longer be sold, or, at any rate, would not be sold so easily as they are today in England.
The man who bought a toy tin watch for a real silver timekeeper suffered no further hurt than the loss of his money and maybe of a train. The case is very different when a man wastes his money upon some worthless fake sold to him under the name of the wine.
The loss of his money does not really matter; what matters is that his health and that of his guests may be temporarily or even permanently injured through his complete ignorance of wine and the shameful advantage taken of his ignorance by some shameless trader. Whether we drink wine or not, we have everything to gain and nothing to lose by knowing a few elementary truths about it. Where does the Vine grow and where are different wines made? What kind of a Trade is the English Wine Trade?
What about those wines which we hear and read about so often: Port, Champagne, Claret, Burgundy, Sherry, Hock and Moselle? These are the questions that I have attempted to answer in the present book. There are other and more important works on wine: such, for instance, as the two textbooks written by me and published by Messrs. Duckworth & Co., in 1919 and 1920 respectively.
The first, Wine and Spirits: The Connoisseur's Text-Book, has been written more particularly for country gentlemen, who have a cellar and the leisure to enjoy both wine and a book about wine. The second, The Blood of the Grape: The Wine Merchant's Text-Book, has been written especially for persons engaged or interested in the Wine Trade. In the present work,
I have endeavoured to compass under the smallest possible volume the greatest number of  elementary truths about Wine and the English Wine Trade, in order that the general public in England might acquire, should they desire to do so, a little more knowledge than they appear to possess about one of the greatest of all God's gifts to man: WINE.
Long before the earth had become habitable, before any sign of animal life had appeared either on land or in the seas, the wild vine grew from Pole to Pole, in the warm equable temperature which then enveloped the whole globe. At Brjamslak, in Iceland; at Bovey Tracey, in Devonshire; at Sezanne (Marne), in France; in Silesia; in the valley of the Rhine; in Switzerland, and in many other parts of Europe as well as in America, fossils have been found which modern palaeontology enables us to recognize as dating back to the earliest stages of the crust formation of the earth, and which show distinct impressions of the leaves of different species of wild vines.