Trends of Civilization and Cultures 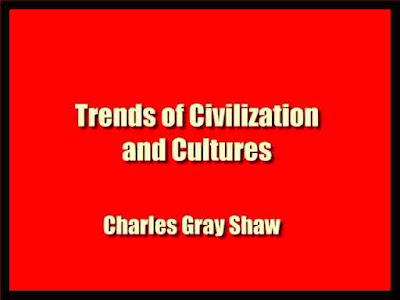 A study of civilization is no novelty. From the beginning Of human history, if not in the pre-historic period, man has Shown such interest in himself as to record his deeds and Thoughts. Hence the concern for civilization shown by our contemporaries is not wholly different from that of fossil men in the Geologic past, while the enthusiasm that Americans feel for their Cities is fairly well matched by similar emotions in the hearts of Aurignacian men, who were proud of their caves.
In addition to recording his activities, man has rationalized Them; hence we have the intensive studies of civilization as found In the writings of Polybius and st. Augustine, Hegel and Spengler, to say nothing of certain impressionistic works which Have appeared since the world war. In the present work, it has Been the intention of the author to come to an understanding
With the present, although not to the extent of discussing " what's wrong with the world " or " what this country needs." The pursuit of the present, as carried on in the following pages, Has necessitated a consideration of the past even unto the formaTion of the planet whereon civilization has been set up. A civilization that is now bearing fruits both bitter and sweet is deeply rooted in the past.
The range of this book is that of the western civilization although, as will appear toward the close of it, The east has not been overlooked. The sources of this study of civilization and culture have been Varied but none too many and they have been duly noted. But In addition to aid from books, the author has been helped by Certain of his colleagues at new york university. He is in Debted to the following scholars for material assistance in the Connections mentioned: Floyd a. Spencer, ph.D., greek culture And roman civilization; Charles c. Thach, ph.D., feudal civil- Zion; g. Roland Collins, a.M., the economic view of civilizaTion; Albert Sheppard, a.M., the industrial form of civilization; Young hill Kang, sc.B., the eastern question; Rudolph m. Binder, ph.D., the present outlook; vincent jones, a.M., Contemporary music; and e. Hermanhespelt, ph.D., Spanish Culture.
The author desires to make special acknowledgement of aid re- Ceived from his daughter, Winifred Clarke shaw, a.B., who con- Tributed liberally to the chapters on Hebrew religion and the Religious trend of modern life and rendered valuable assistance By correcting both manuscript and proof.

I. THE EVOLUTION OF MAN i
The Solar System-— The Earth — A Terrestrial Point of View — The Origin of Life — The Life Process — Amphibians and Reptiles — The Mammals — The Origin of Man — Fossil Men — Homo Sapiens — Life and Food — Food and Brain — The Human Brain — Brain and Mind — Man the End of Creation — The Liberation of Consciousness — The Emergence of Mind
II. THE HUMANIZING OF MANKIND .25
The Discovery of Man — The Free Brain — Emancipation through Industry — Industry and Intellect — The Effect of Art — Art as Play — Art as Expression — The Development of Language — Social Life and Humanity — Family, Village, City — Totemism — The Natural and the Supernatural — Animism — Magic — Survivals of Primitive Belief — The Nature of Humanity — The Emancipation of Man
III. THE FACTORS IN CIVILIZATION 50
The Meaning of Civilization — The Point of Departure — Nature and Humanity — Instruments and Institutions — Cause and Purpose — The Double Task of Civilization — Determinism — Physical Causation — Social Determinism — Determinism Inadequate — Civilization and Progress — What Progress Means — Past and Present — Stages of Progress — Standards of Progress — Physical and Moral Progress
IV. FORMS OF CULTURE 75
The Meaning of Culture — Culture and Civilization — Culture and Humanity — Culture Contrasts — Animality and Humanity — The Immediate and the Remote — Conquest and
Contemplation — Outer Existence and Inner Life — Opponents of Culture — Culture and Work — Culture and Democracy — Decadence and Dilettantism
the book details :
Download  50  MB