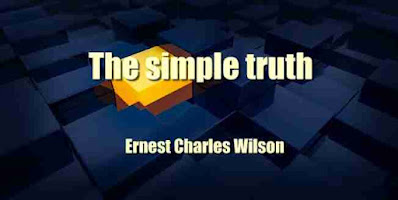 Finding within himself "Tne Simple Truth" concerning the seemingly complex conditions of life, man traces the golden thread of relative being through all forms of thought and action; and by comparative study learns the relative equality of the seeming and the real.
This constructive study and exemplification, which have characterized many people in all ages of the world, come to us in this age as The Harmonial Philosophy of Andrew Jackson Davis (1826-1910). His extensive writing and teaching inspired the founding of and the Founder-Secretary, Ernest C. Wilson, has responded to the need for "The Simple Truth, Harmonially Interpreted," by writing this book.
The Harmonial Philosophy is an eclectic method of thinking and acting, by which the inward realization of infinite potentiality may become outward manifestation, through harmonious correlation of capability and opportunity. By discovering the relationship between exterior effects and interior causes man may adjust himself to the environment, and profit by every experience.
By awakening, a consciousness of the Oneness existing in all forms, the seeming complex will become simple. Arouse the universal in each, and the many readily discern intimate fraternalism. Whatever benefits one up- lifts all: so each will endeavour to benefit others, that he may be uplifted.
Cultivate the tendencies, in yourself, which led you to study "The Simple Truth", and they will direct you in the ways of such usefulness as will disclose the abundance of happiness, success and growth which surrounds you. Encourage the manifestation of this interior realization which urges you to bless and serve, as the opportunity presents itself; and you will be enriched by the imperishable principle which produces all things.
Constantly increase your correspondences with the positive, real and permanent qualities in life, which neither change nor decay; and you will become an exemplification of The Harmonial Philosophy. You will bless the day which brought you "The Simple Truth, Harmoni- ally Interpreted", by bringing its message into the lives of others. I am always,
CONTENTS
Introduction 5
Preface 7
How to Study This Book - 8
I. The First Cause - - - - 9
II. The Universal Principle - 16
HI. The Law in Action - 23
IV. The Value of Service - - - 30
V. Universal Brotherhood - - 37
VI. Universal Justice ----- 44
VII. The Way of Reality - - - 50
VIII. Form and Consciousness - - 58
IX. Adjustment ------ 65
X. Oneness - 72
XI. The Utility of Wisdom - - 78
XII. The Greatest Gift - - - - 84
XIII. Harmonia Living - - - 91
Aims of the Harmonia Institute - 99
Announcements - - - - - --100
Index 103
the book details : Download 4.3