The folklore of fairytale 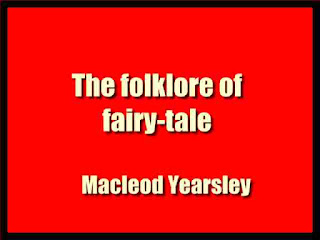 The fairy-tale is our first introduction to literature. It is primitive literature, abounding with enchanted princesses, heroic youngest sons, talking animals and horrid monsters; literature which fascinates our early years, supplies our craving for the marvellous, and which we receive without question.
These early years are, moreover, those in which inanimate objects seem to us as real and living as they were to our animistic ancestors —as they are to the modern primitive savage. Eagerly listened to at our most impressionable age from the lips of mother or nurse, the fairy-tale lingers with us throughout life. It holds a prominent place among those cherished memories of childhood which, stored in the subconscious mind, come back to us at odd, sometimes at critical, moments of existence. Some of us—the best, I venture to think—are not ashamed in maturer years to acknowledge a partiality for fairy-tales.
Every real lover of children loves these stories; but there are some persons who profess to disdain them as childish nonsense—tales “ told by an idiot, signifying nothing ”— even though they may still feel a lingering affection for them in their secret hearts. But fairy-tales have a still more important claim upon us. Few realize that these romances of our childhood are something more than nursery stories full of absurdities and impossible incidents, designed to catch a vagrant attention or amuse an idle hour.
The ordinary reader, like the child, is content to take them at their face value—as interesting literature of a kind, pleasing a taste for romance, or tickling a fancy for the marvellous. But to the rational mind, they are something more. Its spirit of inquiry spurs it to seek what hidden meanings lie beneath the surface and to learn the knowledge that fairy-tales can bring as to the mental make-up of the men who first told them in the past.
Inquiry reveals to us that the stories which please our children once equally fascinated their adult ancestors when the race was itself but in its childhood. One of the great debts which we owe to students of folklore has been the collection and elucidation of folk¬ tales, and many volumes have been written upon this fascinating subject.
These contain large masses of information about the legends of many peoples, and the fact which first strikes one is that most of them can be reduced to certain well-defined groups of narratives which are common to all races, although not infrequently disguised by local and other influences. We realize further that the underlying motives of many of these stories can be traced back for hundreds, even thousands, of years.
That is to say, there exists a remarkable universality of type. The group of stories, for example, the central idea of which is the “ separable soul ”—the dwelling of the soul or heart, as the seat of life, in some secret place apart from the body has variants in Indian, Norse, Gaelic, Russian, Saxon, Bohemian, Serbian, Tartar, Samoyede, and Arabian folk-tales, and is found as early as the fourteenth-century b.c. in the Egyptian story of “ The Two Brothers.” Hence, rightly to under¬ stand the true significance of the fairy-tale, the world must be ranged over and the folklore of its many peoples examined in order that such primitive types may be found as will give the clue to its origin.
When this has been accomplished, the first feeling of the inquirer is one of astonishment at the number of primitive customs represented in the fairy tales upon which the dawning literary tastes of our childhood have for so long been fed.
The many books which have been written upon the genesis of our fairy-tales are not always within the easy reach of every reader, nor can he usually afford the time for the perusal of long and technical works. Moreover, they contain a wealth of detail that is sometimes so great as to leave the reader with that sense of bewilderment that is induced by literary indigestion. It will, therefore, be my endeavour to offer in this book such information, illustrated by examples, as will furnish an account sufficiently connected and comprehensive to enable the general reader to form a clear understanding of the true nature and meaning of the fairy-tales which were told him in his childhood, and which he, in turn, passes on to his own children. I shall, further, confine myself where possible to those tales which are current in the British Isles, either as indigenous to the country or as introduced and made popular by British writers.
At the outset a distinction must be made between the true and the invented fairy-tale; that is to say, between the genuine folk-tale which can be traced back through the ages and has its variants in many countries, and the tale which has been invented with a literary purpose, such as the stories by Hans Christian Andersen, Lord Brabourne, and some by Mr Rudyard Kipling. As Hartland 1 has pointedly remarked, “ the science of fairy-tales is concerned with tradition and not with literature.”