The science of breath and the philosophy of the tattvas 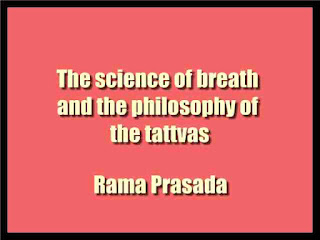 From introduction:
A Word of explanation is necessary with regard to the book now offered to the public. In the ninth and tenth volumes of The Theosophist, I wrote certain essays on "Nature s Finer Forces." The subject of these essays interested the readers of TJie Thcosophist so much, that I was asked to issue the series of essays in book form.
On reading the essays for this purpose I found that in order to make a book they must be almost entirely rearranged and perhaps re-written. However, not being equal to the task of re-writing what I had once written, I determined to publish a translation of the book in Sanskrit on the Science of Breath and the Philosophy of the Tattvas. As, moreover, without these essays, the book would have been quite unintelligible,
I decided to add them to the book by way of an illustrative introduction. This accordingly has been done. The essays in The Theosophist have been reprinted with certain additions, modifications and corrections. Besides, I have written several more essays in order to make the explanations more complete and authoritative. I was confirmed in this course by one more coil situation. The book contains a good deal more than the essays touched upon, and I thought it better to lay all of it before the public.
The book is sure to throw a good deal of light upon the scientific researches of the ancient Aryans of India, and it will leave no doubt in a candid mind that the religion of ancient India had a scientific basis. It is chiefly for this reason that I have drawn my illustrations of the Tattvic Law from the Upanishads.
There is a good deal in the book which can only be shown to be true by long and diligent experiments. Those who are devoted to the pursuit of truth without prejudice will no doubt be ready to wait before they form an opinion about such portions of the book. Others it is useless to reason with. To the former class of students, I have to say one word more. From my own experience, I can tell them that the more they study the book, the more wisdom they are sure to find in it, and let me hope that ere long I shall have a goodly number of colleagues, who will with me try their best to explain and illustrate the book still better and more thoroughly.

Tattvas. Evolution
The Mutual Relation of the Tattvas and of the Principles.
Prana
The Mind
The Cosmic Picture-Gallery
The Manifestations of Psychic Force
Yoga The Soul.
The Spirit
The Science of Breath
GLOSSARY
the book details : Download 8.1