The grocery trade, its history, and romance 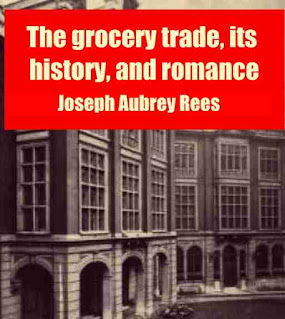 The book illustrates the history of the grocery trade in England
Excerpt:
As these pages will show, the grocer has, for nearly six centuries, played a not unimportant part in English history. I have endeavoured to trace him from the time, when, in the fourteenth century, he first appeared in London annals, through all the subsequent changes up to today, when we find his class comprising so many thousands, and his wares arriving from all quarters of the globe.
Up to the end of the mediaeval period, the grocer's customers were as few and select as the articles which he sold; only rich people, in fact, we're able to patronise him. Such groceries as were needed by the village communities were purchasable from the Chapman who travelled from place to place, with his pack on his back.
From the reign of Queen Elizabeth onwards we see the grocer and his wares gradually multiplying stepping out, as it were, from the circumscribed sphere, and, responding more readily to the wants of the many, becoming established as a distinct section of the Shop-keeping class.
During the seventeenth and eighteenth centuries, as the surplus population of the villages went to swell that of the towns, and the great centres of industry sprang up, their necessity proved the Grocer's opportunity, with the result that his trade became indispensable to the community: for, on the one hand, he received the constantly increasing varieties and quantities of the goods that reached our shores from overseas, while, on the other,  he satisfied the ever-varying requirements of an ever-growing population.
He was still, however, many years distant from his successor of today; he ground and wrapped his own pepper; roasted this own coffee, and, later, blended his own teas. Few, if any, extended their outlook beyond their own town. It was not, however, until the nineteenth century that the Grocer, no longer bound down by the Apprentice Laws of Elizabeth and the conservative Bylaws of Municipalities, nor handicapped by the financial barriers of the days of Protection, was able to give free play to his capacity for business enterprise, and embark upon the wonderful career of commercial prosperity which has placed his trade in the forefront of the Distributive Industries.
But, whether with the growth and multiplication of the Universal Provider, or the Merchant Storekeeper, the Grocer, whom we saw enter in the fourteenth century, will be seen disappearing with the twentieth, is a problem which I leave my readers to solve. If, occasionally, we read his name in the Birthday Honours List, seldom, if ever, do we miss it from the Gazette List of failures?

CHAPTER I
IN EARLY ENGLAND
Trade-in Anglo-Saxon Times: The Utility of the Fair: The Pedlar: Periodical Markets: Traders in Early England: The First Shop* : Varieties in Trade: London and its Trade Marts: Restriction of Trade: Advantages of Freemen
CHAPTER II
SPICERS AND PEPPERERS
The Craft-gild: The Oaths of the Newcastle Spicers: The Pepperers' Qild of London: Prominent Pepperers: The Early Ordinances: Upholding the Honour of the Trade: The Cheesemongers' Gild: Ordinances approved by the Mayor: The Cheesemongers' Ordinances: Objection to Dairymen from Wales: Offences and Penalties
CHAPTER III
THE GROCERS OP LONDON
Cheapside in the.Thirteenth Century: Sopers' Lane: Grocers' Porters: Their Duties and Remuneration: Formation of the Grocers' Company; Memorable Meeting of Twenty-two Pepperers: Their Singular Ordinances: Their Regulations re Apprenticeship: Election of Wardens: Foremost Grocers of the Day: William de Grantham: Roger Carpenter: John Hammond: Andrew Aubrey: Activity in Cine Life: Progress of the Grocers' Company: New Members added: Decisions re Admission of Women
CHAPTER IV THE GROCERS' COMPANY
The Year 1376: Disputes amongst Londoners: The Fraternity of St. Anthony Petition to Parliament re "Merchants called Grossers" : A Notable Grocer of the Period: Nicholas Brembre: His Leadership of the Victuallers: The Grocers draft New Ordinances: Establishment of a Court of Assistants: Grocers elect Representatives on the Common Council: Brembre's Influence with the King: John Philpot his Miniature Navy: The Tragic Death of Brembre
the book details : Download Volume 1  -  11.4 MB