Epictetus and the New Testament 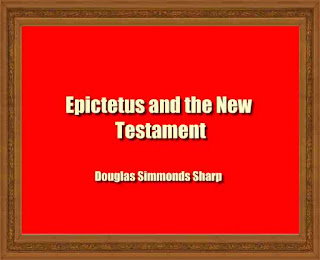 The following chapters represent an attempt to deal with Resemblances in Language, Thought, and Teaching — together with certain Differences — which exist between the works of Epictetus and the New Testament. To speak of Language only, in Epictetus there are often found the same nouns, adjectives, pronouns, verbs, verbal forms, prepositions, conjunctions, particles, the same syntax as in the New Testament.
The texts used are, for Epictetus, H. Schenkl's Editio Minor in the Teubner Series (1898), and for the New Testament that of Westcott and Hort. The author has found invaluable Moulton-Geden's Concordance to the New Testament, and Mrs Carter's Translation of the Moral Discourses of Epictetus in the Everyman's Library (edited by Dr W. H. D. Rouse); he moreover acknowledges his indebtedness to Prof J. H. Moulton, not only for his writings but also for many impressions received during the few years that he had the great privilege of being his pupil.
The usual abbreviations have been employed, such as 'Matt' for Matthew, ' E.' for Epictetus, ' N.T.' for New Testament. In regard to the references to Epictetus, 'Bk.' signifies one of the Books of the Discourses, ' Ench.' the Encheiridion or Manual, 'Frag. Diss.' the Fragments of the Discourses, ' Stob.' Fragments from Stobaeus, 'Cod. Vat.' Maxims found in a Vatican Manuscript of the 14th century. Amongst other abbreviations, ' Proleg.' for Dr J. H. Moulton's Grammar of New Testament Greek: Volume I., Prolegomena (ist edition).

Phrases Similar or Identical
Nouns
Pronouns (including the Article)
Adjectives
Verbs...
Adverbs and Prepositions
Conjunctions and Particles Sundries.
Resemblances between Epictetus and
the New Testament in Thought and Teaching
Differences between Epictetus and new Testament in Language,
Thought and Teaching
how to account for the resemblances. —
Had Epictetus Relations with Christianity?
Index to Greek Words
Index to References
Index to Subjects