Early to bed and early to rise 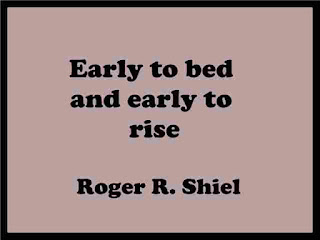 There are many important questions before the American people. Two of them touch to some degree all the people. One of these two is the importance of government encouragement to livestock raisers to induce them to improve the grade of their stock, in order, first, to make stock raising more profitable to the breeder, and, second, that the people may get the very best that can be produced, especially of the stock utilized for food.
The other question is the importance of compelling slaughterers, packers and butchers to be honest and supply to the people as first-class only what is first class, and not palm off on them an in- ferior grade at first-class prices. Added to this question is the one of making unlawful any combination between buyers, slaughterers or packers for the forcing of prices upward on the product to the consumer, and downward to the producer.
A discussion before the people of these important questions ought always to be by one who has ample knowledge of the subject and not by a mere theorist. Anybody can theorize, and theories are too often like dreams, having nothing more substantial for a basis than bad digestion.
The following pages were prepared by Mr Roger R. Shiel. Among livestock raisers and among livestock buyers, such as the owners of the great meat shops of New York, Philadelphia, Boston, Baltimore, Chicago and Washington, and among the packing houses, both large and small, there is no more familiar name than that of Roger R. Shiel, better known as ' ' Rhody. '
For forty years or more he has been ivilfe443 4 Twenty Yeaks in Helt. one of the largest buyers of cattle, hog. and sheep in the United States, especially of high stock.
He never dealt with the poorer grades. He has had very much to do with inducing hog, sheep and cattle raisers to improve their stock, and has been an ardent preacher of the doctrine that only high grades should be permitted to be raised by the farmers and ranchmen. He has earnestly advocated active interference of the government in this matter, by following the example of Denmark, France and other European countries.
While Mr Shiel is familiarly known to all livestock producers and all livestock buyers, his name is not so well known to all the people, and not knowing him they may be led to doubt some of the startling facts he now gives to the public, especially those in relation to the despotism of the Beef Trust. Hence, it is proper to say that Mr Shiel has spent more than three hundred thousand dollars in fighting this gigantic oppressor, a fight he carried on for more than twenty years. While engaged in a business where he bought from two million to five million dollars worth of livestock annually, Mr Shiel has found time to take an active interest in politics.
At every Republican National convention, beginning with that of 1868, when General Grant was nominated the first time, Mr Shiel has been a familiar figure, and he has campaigned in Indiana with almost every one of the great Republican orators who have visited that State, including such men as Allison, Hawley, Cullom, Fry, General Coggs- well, Hoar, General Gibson, Sherman, Foraker, Bradley, Harlan, Gen. George F. Sheridan, John Finnerty, John Scanlon and Corporal Tanner, and has always been highly regarded by those men for his sterling worth.
Mr Shiel began life as a farmer boy, as he tells in this little book. Soon after the war between the States began he entered the army of the Union, at the age of eighteen, and remained until its close. He fought in nearly every battle of the Army of the Cumberland from Shiloh to Ben- tonville. At one period of his army service, he was an orderly for General Sheridan, and afterwards for Gen. Judson Kilpatrick, and those two gallant officers held him in high esteem until their death. It was the advice of General Kilpatrick which led Mr Shiel, on his return from the army, to abandon active farm life and engage in commercial pursuits.
The close of the war found young Shiel, like most of the soldiers, with little ready cash, as there was but small chance to save out of the pittance of sixteen dollars a month. Full of energy and of confidence in himself, and following the advice given him by his friend. General Kilpatrick, he invested his little capital in the purchase of eight head of cattle at Strawtown in his native county, took them to Indianapolis and sold them to such advantage that he had a profit of $80. Thus he began his career as a dealer in cattle, hogs and sheep, a business that grew, under his intelligent management to gigantic proportions.
All his life Mr Shiel has been a sterling and loyal son of the Roman Catholic church but has never been a bigot. His heart and his purse have always been open to every deserving object, and there has not, possibly, been a church of any denomination built in Indianapolis during his more than forty years' residence in that city, to which he has not liberally contributed. Every hospital, every charitable, benevolent or educational institution has found a liberal friend in him. Very recently he gave $2,000 to the Y. M.
the book details : Download