Chapters on the art of thinking And other essays 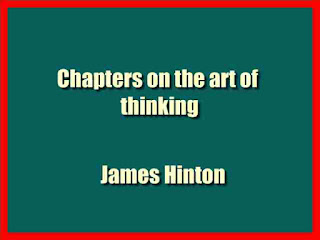 The present volume is composed partly of papers that were found amongst the manuscripts left by my father in a form ready for publication, partly of essays that have appeared on various occasions in literary or scientific periodicals. No use has been made of the greater mass of the manuscripts which exist, as they were intended to be entirely rewritten and rearranged before publication. Nor have any extracts been given from a series of volumes which contain his work from 1859 to 1863 and again from 1869 to 1870.
These volumes would form the most available source to whoever wished to make a study of the course and bearings of my father's inquiries but are hardly adapted for general perusal, as they are more a record of his thoughts in the process and order of development than an exposition of the results at which he arrived. In order to make their contents accessible, it is necessary to bring them together into one part which are often. separated by many pages, and to collate them with later and unprinted manuscripts.
A book thus formed will, I hope, sometimes be produced. Of the essays in this volume the two, " On the Bases of Morals" and "Professor Tyndall and the Religious Emotions," which appeared in the " Contemporary Review," taken together with the short paper entitled " Others' Needs," seem to me to give the best representation there is of the ethical portion of my father's writings. Between pages, l00 and 212 will be found a series of articles which are for the most part reprinted from the " Christian Spectator."
Some of them were in the form of letters to the Editor, and when this was the case I have simply removed unnecessary paragraphs. Amongst them, on pages 213, is an explanation of " The Mystery of Pain," contributed at the Editor's request shortly after the appearance of that book. It is included here, as it places the scope and object of that work in a very clear light, and is the only available reference to a class of subjects that occupy great prominence in the manuscripts.
Although many of the essays from the " Christian Spectator" were written so long ago as i860, it will be found, I believe, that they place in a very clear light a great many elements which were essential in the development of my father's later thoughts.
At tlie end of the volume will be found those amongst my father's scientific papers which seem to have a general interest, and at the same time not to be altogether disconnected with his philosophical views. Of the greater part of his writings on science I am not in a position to give a summary, nor would it be of general interest if I were, as they consist of papers on particular questions in medical science, for the most part on subjects connected with aural surgery.

INTRODUCTION BY SHADWORTH HODGSON. ,,
I. CHAFTEBS FROM THE ART OF THINKING —
II. CORRECTION OP THE PREMISS . . .
IIL ON THE ANALOGY BETWEEN THE ORGANIC AND THE MENTAL
IV. ON SEEING THE UNSEEN.
V. THOUGHT AND ART...
IL ON THE BASIS OF MORALS
IV. PROFESSOR TYNDALL AND THE RELIGIOUS EMOTIONS
V. ON FREEWILL ......
VI. THE RELATION BETWEEN THE ORGANIC AND INORGANIC WORLDS
VII. SIR w. Hamilton's philosophy.
VIII. THE IDEA OP CREATION.
IX. ON THE RELATION OF SCIENCE AND THEOLOGY
X. ON THE RELATION OF SCIENCE AND PHILOSOPHY. ,
XI. THE TWO WORLDS .....
XII. THE TWO SIDES OP A THING...
XIII. THE POSITIVE PHILOSOPHY: MR. HERBERT SPENCER
XIV. ON TWO PENHOLDERS
XV. ON MIRACLE
the book details : Download 18.3 MB