How to write for a living 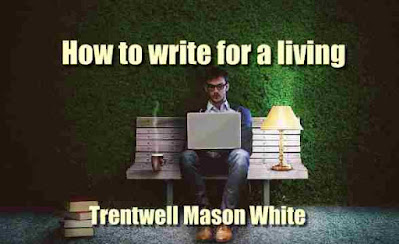 There is far too much glib talk about how easy it is to write if one will follow "just a few, simple rules." Too many happy little cliches and copy-book maxims are lugged in to show that "it's largely perspiration — not in- spiration"; that "it's a matter of merely applying the seat of the pants to the seat of the chair," and so on.
In certain books on writing the instructor is pictured as a kind of avuncular old soul who, while the student relaxes before his typewriter, leans over his shoulder and, with a couple of comfortable comments, sets the tyro-author aright so that the manuscript is accepted the next week by the Post. Or, in certain other books, the instructor is clearly one of those college professors of literature who has known for years just how to do it but actually has never himself been able to sell a smidgeon of fiction, even to the sleaziest "little" magazine.
His Jovian pronouncements, neatly larded with many an obscure literary allusion, are enough to confuse anyone who modestly seeks to pry a speck of money loses from almost any kind of publication, not insisting on The Atlantic Monthly as the only respectable magazine left in a naughty world. It is my purpose, then, to avoid these extremities, if I can, and, in this introduction, to describe to you some ways in which this book may be made practicable for your own specific ends.
First off, my assumption is that you are not fundamentally concerned with becoming literary; that, on the contrary, your interest in How To Write for a Living starts and finishes with the idea expressed in that book title. Next, I assume that you are literate, that you can use the English language facilely and with some imagination. And finally, it is my hope that you are genuinely serious in your intention to write; that you are willing to spend a fairly large amount of time working at writing — not all of your time, to be sure, because you probably are currently preoccupied with earning a livelihood otherwise until authorship, in terms of at least four figures, can release you from your present vocation. If you agree, then, with the foregoing assumptions, let's get on. In theory, writers write because they "have a story to tell." In fact, that is not always true.
Most authors write because they want and need the money or reputation that sometimes comes from auctorial labour, because they don't like other kinds of work, and because they find that the business of putting words together to sell is satisfying if drudging vocation.
That they seldom have a story to tell but must painfully manufacture one out of whatever odds and ends they can pick up should be obvious to any person who reads the popular magazines and books. The average piece of fiction written by the average successful author is thus clearly built out of necessity — financial necessity — not bom out of literary inspiration.