The will to believe, and other essays 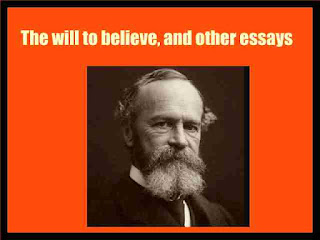 From Preface:
At  most of our American Colleges there are Clubs formed by the students devoted to particular branches of learning; and these clubs have the laudable custom of inviting once or twice a year some maturer scholar to address them, the occasion often being made a public one.
I have from time to time accepted such invitations, and afterwards had my dis- course printed in one or other of the Reviews. It has seemed to me that these addresses might now be worthy of collection in a volume, as they shed explanatory light upon each other, and taken together express a tolerably definite philosophic attitude in a very un-technical way.
Were I obliged to give a short name to the attitude in question, I should call it that of radical empiricism, in spite of the fact that such brief nicknames are nowhere more misleading than in philosophy. I say 'empiricism,' because it is contented to regard its most assured conclusions concerning matters of fact as hypotheses liable to modification in the course of future experience; and I say ' radical,' because it treats the doctrine of monism itself as a hypothesis, and,  unlike so much of the halfway empiricism that is currently under the name of positivism or agnosticism or scientific naturalism, it does not dogmatically affirm monism as something with which all experience has got to square.
The difference between monism and pluralism is perhaps the most pregnant of all the differences in philosophy. Primdacie the world is a pluralism; as we find it, its unity seems to be that of any collection; and our higher thinking consists chiefly of an effort to redeem it from that first crude form. Postulating more unity than the first experiences yield, we also discover more. But absolute unity, in spite of brilliant dashes in its direction, still remains undiscovered, still remains a Grenzbegriff, " Ever not quite " must be the rationalistic philosopher's last confession concerning it. After all, that reason can do has been done, there still remains the opacity of the finite facts as merely given, with most of their peculiarities mutually unmediated and unexplained.
To the very last, there are the various ' points of view ' which the philosopher must distinguish in discussing the world; and what is inwardly clear from one point remains a bare externality and datum to the other. The negative, the alogical, is never wholly banished. Something "call it fate, chance, freedom, spontaneity, the devil, what you will " is still wrong and other and outside and unincluded, from your point of view, even though you be the greatest of philosophers.
Something is always mere fact and givenness ; and there may be in the whole universe no one point of view extant from which this would not be found to be the case. " Reason," as a gifted writer says, " is Preface. ix but one item in the mystery; and behind the proud- est consciousness that ever reigned, reason and wonder blushed face to face.
The inevitable stales, while doubt and hope are sisters. Not unfortunately the universe is wild, game-flavoured as a hawk's wing. Nature is a miracle all; the same returns do not save to bring the difference. The slow round of the engraved- er's lathe gains but the breadth of a hair, but the difference is distributed back over the whole curve, never an instant true, ever not quite."
Contents:
The will to believe.--Is life worth living?--The sentiment of rationality.--Reflex action and theism.--The dilemma of determinism.--The moral philosopher and the moral life.--Great men and their environment.--The importance of individuals.--On some Hegelians.--What psychical research has accomplished
the book details : Download 9.5 MB