The reign of the Stoics 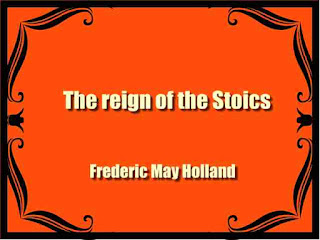 Much as the Stoics have been talked about, but little justice has been done to either their literature or their history. Seneca, in whom, as Macaulay says, "there is hardly a sentence which might not be quoted," is, like Dion, the ** Golden-mouthed," accessible to the English reader only in antiquated versions, scarcely to be found in the largest libraries.
Their history has not, so far as I know, been fully written in any language. Such is the need for a book like this. Its first chapter speaks of the place of these philosophers in history. The next five chapters give specimens of their noblest sayings about religious truth and moral duty. These I have tried to render accurately, though freely, ad- ding nothing, but omitting much.
Of their commonplaces and errors, I have made out no list. It is enough for us to see what truth Stoicism has still to teach. To show this, I have given in the last chapter some of their most characteristic discoveries in one of the most difficult, but important, fields of human thought. Thus I hope to be of service to the friends of moral culture and religious
During the greater part of the first Christian century, the Roman Empire was cursed by tyranny, profligacy and anarchy. Then reigned Tiberius, Caligula, Clau- dius, Nero, Galba, Otho, Vitellius, and Domi- tian. But with the latter's death, A. D. 96, began what Gibbon justly calls ' the period in the history of the world during which the condition of the human race was most happy."
These eighty-four years, until A. D. 180, were passed under the rule of five emperors, Nerva, Trajan, Hadrian, and the two Antonines, all of whom, says Gibbon, "delighted in the image of liberty, and were pleased with considering themselves as the accountable ministers of the laws." Of the Antonines, we are further told that |their united reigns are possibly the only period in which the happiness of a great people was the sole object of the government."