The essence of religion 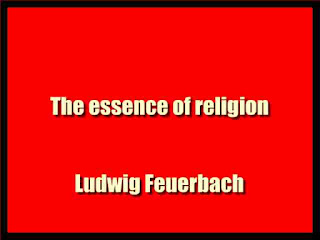 God the image of man. Man's dependence upon nature is the last and only source of religion

In submitting to the American public the subsequent argument for the natural origin of religion, by a thinker whose name has, during the last year, received a well-deserved but long-withheld prominence on this side of the Atlantic, by the eloquence of one of his noblest peers in the realm of thought, as well as by the lamentable news of his recent death: we consider it not altogether supererogatory to introduce it by a brief sketch of the author’s life, especially for the sake of assigning to the following paragraphs their true place in his life work.
Ludwig Feuerbach was the fourth of the five sons of the celebrated German criminalist Anselm von Feuerbach born July 28th 1804, at Landshut in Bavaria. The cissitudes of his simple life do not present any sensation¬ al features, and neither his position in life, nor his inclination tended to bring him prominently before the public. His life was eminently a life of thought, and his writings are his real biography.
What Feuerbach was at any time of his life, he was with his whole soul. In his youth, as a pupil of the Gymnasium at Auspach, he was a pious Christian—pious with all the energy of his character. In the fervour of his piety, he devoted himself from free choice to the study of the¬ ology at the University of Heidelberg, but without find¬ ing there any satisfactory nourishment for the restless cravings of his aspiring mind. He, therefore, left Heidelberg in 1824 for Berlin, whence he wrote to his father as follows: “ I have abandoned theology, not however wantonly or recklessly or from dislike, but because it does not satisfy me, because it does not give me what I indispensably need. I want to exprcss Nature to my heart,  but he possessed too inde¬ pendent a mind to swear upon the master’s word, and gradually, not only emancipated himself from Hegel’s philosophy but determined to altogether throw off speculative philosophy and to exclusively devote himself to the only true science, that of Nature. But the death of King Max the First of Bavaria, whose liberal patronage had enabled Anselm von Feuerbach to give to each of his five talented sons a liberal education, frustrated tins intention, and prevented Ludwig Feuerbach from continuing his studies.
He accordingly settled in 1828 as a private tutor at the University of Erlangen and lectured on Logic and Metaphysics, but he soon realized that the prevailing scholasticism of a royal university was not a congenial atmosphere for his independent mind, and throwing up all official connection with licensed institutions and systems, he retired into the rural solitude of Bruckberg, a small village near Auspach, where Nature|and Science absorbed all the fervour of his enthusiasm and inspired him, during a residence of 25 years, with the most important of his literary creations—a residence that was in-; interrupted only by a short visit at Heidelberg in 1848, - whether he had been invited by the student youth to give a course of lectures before a promiscuous audience on“ The Essence of Religion.” The feelings with which j he hailed this self-emancipation from the thraldom of- flee and scholastic influences can best be realized from the words in which he gave vent to his exultation when in 1838 he had been united in blissful wedlock to the sister-in-law of the friend who had secured for him the asylum at Bruckberg
Among his writings which have been published in a uniform edition comprising ten volumes, the following desire especially to be mentioned: Thoughts on Death and Immortality, (1830); History of Modern Philosophy from Bacon of Verulam to Spinoza, (1833); Representation, Development and Criticism of Leibnitz’s Philosophy, (1837); Pierre Bayle, (1838); Essence of Christianity, (1841, second edition 1843, third edition 1848—translated by Marion Evans); Essence of Religion, (1845). This last-named work which is here for the first time presented to the American public in translation forms the principal basis for the thirty lectures on “ The Essence of Religion,” which Ludwig Feuerbach, as before stated, held in the winter of 1848-1849 at Heidelberg before a promiscuous audience, and in which he endeavor¬ ed to fill a gap left in his “Essence of Christianity,” by enlarging the argument of the latter, according to which “ all theology is anthropology ” by the addition of “ and physiology,” so that his doctrine and conception of religion is embraced in the two words Nature and Man.
The last principal work of Ludwig Feuerbach is “Theogony according to the sources of Classic, Hebrew and Christian antiquity,” which forms the 9th volume of his works; the 10th volume (1866) consists of a promiscuous col¬ lection of essays on “ Deity, liberty and immortality from the stand-point of anthropology.”
the book details :
Download