The essence of Christianity 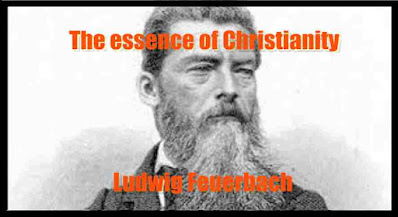 From the author introduction:
The clamour excited by the present work has not surprised rue, and hence it has not in the least moved me from my position. On the contrary, I have once more, in all calmness, subjected my work to the severest scrutiny, both historical and philosophical; I have, as far as possible, freed it from its defects of form, and enriched it with new developments, illustrations, and historical testimonies, — testimonies in the highest degree striking and irrefragable.
Now that I have thus verified my analysis by historical proofs, it is to be hoped that readers whose eyes are not sealed will be convinced and will admit, even though reluctantly, that my work contains a faithful, correct translation of the Christian religion out of the Oriental language of imagery into plain speech.
And it has no pretension to be anything more than a close translation, or, to speak literally, an empirical or historical-philosophical analysis, a solution to the enigma of the Christian religion. The general propositions which I premise in the Introduction are no d Priori, excogitated propositions, no products of speculation; they have arisen out of the analysis of religion; they are only, as indeed are all the fundamental ideas of the work, generalisations from the known manifestations of human nature, and in particular of the religious consciousness, — facts converted into thoughts, i.e., expressed in general terms, and thus made the property of the understanding.
The ideas of my work are only conclusions, consequences, drawn from premisses which are not themselves mere ideas, but objective facts either actual or historical — facts which had not their place in my head simply in virtue of their ponderous existence in folio. I unconditionally repudiate absolute, immaterial, self-sufficing speculation, 1 have many things outside m.y- self, which I cannot convey either in my pocket or my head but which nevertheless I look upon as belonging- to me not indeed as a mere man — a view not now in question but as a philosopher.
I am nothing but a natural philosopher in the domain of mind; and the natural philosopher can do nothing- without instruments, without material means. lu this character I have written the present work, which consequently contains nothing else than the principle of a new philosophy verified practically, i.e., in concreto, in application to a special object, but an object which has a universal significance: namely, to religion, in which this principle is exhibited, developed, and thoroughly carried out.
If my work contained only the second part, it would be perfectly just to accuse it of a negative tendency, to represent the proposition: Religion is nothing, is an absurdity, as its essential purport. But I by no means say (that were an easy task !): God is nothing, the Trinity is nothing, the Word of God is nothing,  I only show that they are not that which the illusions of theology make them, — not foreign, but native mysteries, the mysteries of human nature; I show that religion takes the apparent, the superficial in Nature and humanity for the essential, and hence conceives their true essence as a separate, special existence: that consequently, religion, in the definitions which it gives of God, e.g., of the Word of God, — at least in those definitions which are not negative in the sense above alluded to, — only defines or makes objective the true nature of the human word.
Religion is the dream of the human mind. But even in dreams, we do not find ourselves in emptiness or in heaven, but on earth, in the realm of reality; we only see real things in the entrancing splendour of imagination and caprice, instead of in the simple daylight of reality and necessity. Hence I do nothing more to religion — and to speculative philosophy and theology also — than to open its eyes, or rather to turn its gaze from the internal towards the external, i.e., I change the object as it is in the imagination into the object as it is in reality
the book details : Download 11.4 MB