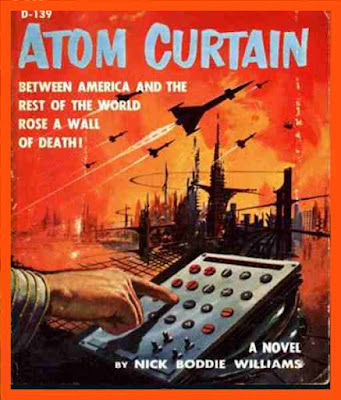 HE BROKE THE BARRIER TO A CONTINENT IN EXILE!
For two hundred and seventy years America had been totally cut off from the rest of the world by an impenetrable wall of raging atomic fury. To the frightened countries of the old world, what had once been the greatest of all powers was now the most fearful of all mysteries. No man ached to know what lay behind that frightful barrier more than Emmett O'Hara, restless airsentinel of the international patrol—whose American ancestors had been’ stranded in Britain the day the atom curtain was raised.
Then, on December 20, in the year 2230, while on routine patrol, O'Hara did the impossible. He broke through the barrier—and lived! But the full story of O'Hara's discoveries and adventures in atomic America is so utterly breath-taking that readers are sure to rate it a classic of modem science-fiction. Turn this book over for second complete novel nick Boddie Williams says he hit on the idea of writing the atom curtain ‘while debating with an editorial writer what might possibly happen to nations behind the iron curtain, and how much more likely all of it would be to happen if the curtain were atomic, rather than iron. It’s about the same line of thinking that led Doyle to write the lost world, or any number of men to dwell upon cut-off places. But of course | couldn’t write about Eurasia, for I’ve never been there.
It was written at the time we were debating the setting up of a fixed-line far out from our shores (the Taft plan, the hoover idea), which became, a little luridly, the approximate line of my atomic curtain. A good many philosophical ideas got mixed up in what was essentially an adventure story, but | can’t be accused of following anyone line, except perhaps darwin’s.” Williams, who works in the Los Angeles Times, considers himself a newspaperman rather than a writer. Nevertheless, he has had stories published in colliers, Saturday evening posts, woman's home companions, and others.
the book details : Download 1.5 MB