Tea, from grower to the consumer by A. Ibbetson 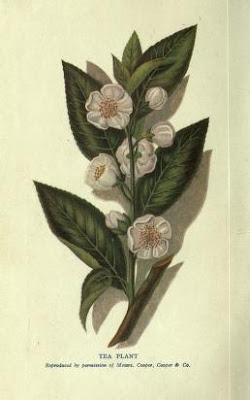 TEA, as everyone knows, is prepared from the young leaves of the tea plant, Camellia Thea (Thea Sinensis), a shrub belonging to the natural order Theaceae, and extensively cultivated in China, India, and Ceylon, and, to a less extent, in certain other countries.
Under the name of Thea Sinensis, the Swedish botanist, Linnaeus, originally described tea as a single species, but later it became known that two distinct plants were cultivated in China, which he named T. Viridis and T. Bohea. These two species were long thought to be the origin of green and black teas respectively. No strictly wild plants have been found in China, but an indigenous tea tree,
Thea assamica (or, as it is now called, Camellia Thea) occurs in Assam, and is generally regarded by botanists as the parent species of all cultivated forms. The tea plant is a bushy shrub which, when left to its natural habit of growth and not subjected to the vigorous prunings necessary for its successful cultivation, attains the height of a small tree. The leaves vary considerably in size and shape, according to the variety, but are leathery, alternate, and generally elliptical or lanceolate, with a toothed margin. Oil glands occur in the substance of the leaf and contain an essential oil to which the flavour of the tea is largely due. The undersurface of TEA the young leaves is thickly covered with fine hairs which entirely disappear with advancing age.
The beautiful white or rose-coloured, slightly fragrant, flowers occur either singly or in clusters in the axils of the leaves; they are succeeded by more or less globular fruits consisting of capsules composed of three compartments, usually with only one seed in each compartment. The question as to the original home of the tea plant is by no means settled, the point at issue being whether, after all, the true home of the plant is in the country naturally associated with it, viz.,
China, or in the neighbouring Indian province of Assam. The evidence in support of. the latter contention is largely based upon the fact that the tea plant attains extraordinary luxuriance in Assam, greater, it is said, than that attained in any part of the Celestial Kingdom, and, arguing that in its natural home a plant reaches its greatest development, supporters of this view maintain that it is in Assam and not in China that we are to look for the home of tea. It by no means follows, however, that the reasoning of this argument is sound, for it has been repeatedly noticed that plants introduced into new countries where conditions seemed favourable for their growth have flourished so well that their luxuriance rivalled that of the plants growing in the land admitted to being their home. Support for the opposite view is sought in a Japanese legend which ascribes to China the honour of being the home of the tea plant; but, unfortunately, there is evidence for supposing that the Chinese never heard of this legend except for foreign sources, although the events related occurred in their own country.
There are, however, certain references to the plant in the writings of a Celestial author who lived about 2,700 B.C., and a Chinese commentator of this ancient author, writing in the fourth century B.C., A TEA calls attention to the mention of the plant and adds that a beverage could be obtained from the leaves by adding hot water.
It appears that the plant was used entirely as a medicine until 550 A.D. when it became a popular beverage. De Candolle, however, in summing up the evidence on both sides, attaches considerable weight to the fact that apparently wild specimens of tea have been found by travellers in Upper Assam and in the province of Cochar, and adds that " the tea plant must be wild in the mountainous region which separates the plains of India from those of China "; he, however, regards the evidence as tending to prove that the use of the leaves was introduced into India from the latter country. Much more certain information naturally exists as to the date of the introduction of the product into Europe.
There is a story which states that a package of a commodity hitherto unknown was received by an old couple in England during the reign of Queen Eliza- beth, and that, instead of infusing the leaves and using the extract, they threw away the coloured liquid and ate the leaves after spreading them upon bread.
Download 8.8 MB