Short sayings of great men. With historical and explanatory notes 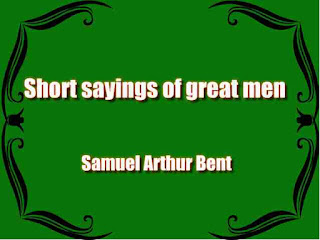 Of someone of the many thousand briefs and pithy remarks which the great men and women of history have uttered, generally without premeditation, yet stamped with the seal of immortality, the question is often asked, "Who said it? "When was it said? Under what circumstances? " These questions are to some extent answered in the following pages.
Curiosity, if not gratitude, would wish to follow to their source words which have, during the centuries since their first appearance, come repeatedly to man's aid in the sudden emergencies wherein history repeats itself. Many of them adorn the page of the historian, giving to narrative its local colour, and lending to descriptions of character the air and dignity of authenticity.
Research may, therefore, pay the debt of history by relieving such sayings of aU adventitious circumstance, by removing those which belong to history from the domain of tradition, and relegating others to the abode of myth.
Strangest of the fictions of history are the historic mots which have made Julian a blasphemer, Charles IX. a murderer^-and Louis XIII. a monster. To banish calumny from serious literature is a service to truth. Only the romantic element of history will there suffer.
The weeds and vines which gave a parasitic charm to the ruins of Rome hastened their decay: they were therefore removed. A Latin poet has asserted that there was no saying which had not been already saying. In later times, Henry IV. will be surprised to know that Agesilaus preceded him in that royal game of romps which both kings thought only a father could appreciate. The poet Rogers was not the first to prefer the art of forgetting to that of memory; and Talleyrand has reason to invoke the curse of Donatus, "Perish the men who said our good things before us! "
No one better than Fournier, in his "Esprit dans I'Histoire," has plucked the Stolen plumage from the daw. I cannot acknowledge my obligations to this iconoclast of bans mots without borrowing Madame du Deffand's judgment of Montesquieu's "Esprit des Lois," — that his "Wit in History" should be called "Wit on History." In collecting true and notable sayings, and happy thoughts flashed in the heat of controversy or the war of wit, I have taken no account of what men have written in books, save as such written words illustrate their own or others' speech; nor will all the sayings of ancient or modern times be included in five hundred pages.
Such a compilation would be as impossible as to bring into one volume every historic event which has stirred man to heroic utterance, or every idea with which the sublime and the beautiful have inspired the scholar and the poet. Too liberal and intention has not been given to the title, "Great Men." Those who remem- ber Lysander's maxim, that, " where the lion's skin fails to reach, it must be pieced out with the fox's," may ask if it is the lion's robe which covers both Julius Caesar and Sir Boyle Roche. If so, they have forgotten that Goethe did not confine his question to the clever things which one century borrows from another, — even dullness has its place:
" Who can think wise or stupid things at all, That was not thought already in the past ?"
the book details :  Download 15 MB