The question of miracles by George Hayward Joyce 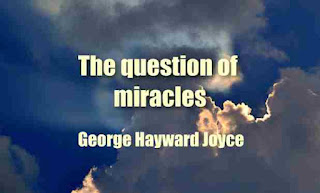 The Christian religion has ever professed itself to ^ be a religion of miracles. Its early documents ^ assure us that a series of miracles ushered in the life of its Founder and that His public ministry was marked by the continuous exercise of super-natural power. We are told that He pointed to these works in confirmation of His teaching: and, further, that He made a special appeal to a crowning miracle — His own Resurrection — which should be for all time an irresistible attestation of the truth of His claims. To that event, the Church has ever pointed as the foundation of her belief. Moreover, if the New Testament writings are to be believed, He endowed His apostles with similar powers: and these they exercised in a manner which leaves no doubt as to their reality.
The miraculous element in Christianity is in accordance with its internal character as a religion. For the Christian revelation is no mere ethical system. It claims to be nothing short of a vast inrush of supernatural forces upon the human race, elevating man to a new plane of being, and conferring upon him an altogether new destiny. According to Christian belief, by the Incarnation and the Atonement, man is raised to sonship to God: his soul becomes the seat of a divine indwelling: and through membership in Christ's body, he receives the pledge of an eternal beatitude to which his nature gives him no claim.
Thus Christianity as a religion supposes that God has superseded the natural order on man's behalf. And considered in the light of these truths, external miracle appears but the congruous expression of the tremendous spiritual transformation. Such, speaking historically, is the relation of the Christian faith to miracles. At the present day, however, the claim is made to hold a non-miraculous Christianity " — to profess Christianity and at the same time to dispense with all belief in the miraculous. This attitude may be said to be one of the leading characteristics of liberal Protestantism- ism. Among German Protestant theologians, it is almost universal.