Problems in chess with Illustrations and Solutions 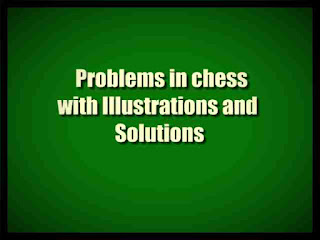 Excerpt from the book's introduction:

Five years ago the composer of these problems was the possessor of a small printing press. He had some chess type and was urged by friends to print a small book of his problems for private distribution.

The idea seemed a good one, and he thought it would be a pleasant task to set up and print the book himself. So the paper for a hundred copies was bought, and the first sixteen pages were printed. At this point, the Great Fire occurred, and in a hurried removal, many of his scrapbooks containing copies of the problems were lost. Afterwards, the matter was dropped until in the fall of 1875 a copy of " American Chess Nuts" happened to fall in his way.

This was found to contain about forty of his lost problems, and he decided to go on and complete the book. And here his friends have the result. The greater part of them was originally printed in various chess papers and magazines, between 1858 and 1861, under his own name and various noms de plume.
Quite a number of four, five and six moves have been omitted for the reason that the solutions have been lost, and the writer is now unable to solve them, either through the decay of chess knowledge, consequent upon fifteen years cessation from all familiarity with the game, or because the positions are faulty.
He does not think they are very remarkable problems, or that the ideas are strikingly original, for he must be modest even at the expense of truth. He presents them to his friends as he would a photograph of his children, trusting that, with all their faults, they will have a kindly greet- ing.