Paris in its splendour 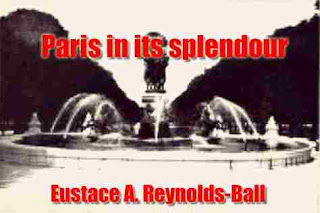 Visitors to the Palais Bourbon are first conducted to the Salle de la Paix, where the ceiling painted by Horace Vernet is the chief attraction. From this hall, a passage leads to the Salle du Trfine, where the mural paintings are by Delacroix. The ceiling of the library is also painted by this artist. The Salles Casimir-P^rier and des Distributions are not very interesting.
Next, we reach the Salle des Conferences. A noticeable feature in the decorations of this hall is some flags taken at Marengo, which surround the colossal statue of Henry lY. For some reason, they were not sent to the Invalides with the other conquered standards, but presented by Napoleon I. to the Chamber, perhaps at a time when he wished to conciliate the Corps.
Many unseemly disputes over the possession of these flags have taken place between the governor of the Invalides and the president of the Chamber. The chagrin of the former at the loss of the flags is probably intensified by the fact that in 1814 most of the flags were voluntarily destroyed to prevent their restoration by the Allies so that the Invalides (which certainly seems the natural repository for these trophies) possesses very few regimental colours.
These halls are shown only during the parliamentary vacation (usually from July to October), but admittance to the Salle des Stances, the actual parliament chamber, is easily obtained from a deputy, or on written application to the Secretaire-General de la Questure. The flag over the roof shows when Parliament is sitting. The chamber is a semicircular hall, ornamented with twenty-four columns of single blocks of white marble of the Ionic order, having capitals of gilt bronze. The principal mural decoration is a copy in a tapestry of Raphael's " School of Athens."