Moral values and the idea of God 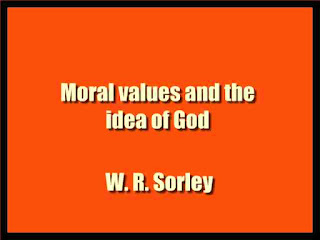 1 have quoted some sentences from the remarkable document which instituted the Gifford Lectureships, for it contains matter of permanent interest. Lord Gifford was deeply convinced that the knowledge which he sought to promote was of importance for human well-being; he wished to make it accessible to those outside, as well as to those within, academic circles; he had confidence in reason and left his lecturers free to follow whithersoever the argument might lead, and he himself gave a description of the kind of knowledge which he had in view. In this description, he coupled "the true foundations of all ethics and morals" with "the true knowledge of God."
The present work is concerned with the relation between these two topics. The point of view from which that relation is regarded is not the most common one, but neither is it by any means novel. Many philosophers have held that ethical ideas have a bearing on the view of the universe which we are justified informing, and they have allowed their thinking to be influenced by these ideas.
Since Kant proclaimed the primacy of the practical reason in certain regard, this point of view has been adopted by thinkers of different schools, and reasons have been urged in its support. But a systematic investigation of the validity of the procedure is still lacking.
We must ask, What is the justification for using ethical ideas, or other ideas of value, in philosophical construction? In what way, if at all, can they be used legitimately? And what effect have they upon our final view of the world?
A systematic investigation of these questions has been attempted in the present volume. The lectures of which the book consists were delivered in the University of Aberdeen in the summer terms of 1914 and 1915. Although nearly a year elapsed between the tenth lecture and the eleventh, the whole is intended to be a continuous argument. In carrying out this argument, no attempt has been made to give a critical survey of contemporary thinking on the topics which arise for discussion. To have done so would have been to extend unduly the length of the book. And a survey of this kind has now been rendered unnecessary by the work of my friend and predecessor in the Gifford Lectureship, Professor Pringle-Pattison.
Through criticism of recent philosophy, he has elicited a view akin to that which I have reached in another way. Both the similarity and the differences are indicated by the title of my book. A few days before my appointment to the Gifford Lectureship, I was honoured with an invitation to give a course of Hibbert Lectures on Metaphysics at Manchester College, Oxford.
These lectures were delivered in the winter of 1913-14, and for them, the greater portion of the material now published was first drafted. This material was revised and enlarged before it was given at Aberdeen; and the whole has been again revised, with additions in some places and omissions in others, in preparation for the press. In present circumstances, it is perhaps unnecessary to apologise for the delay in its appearance.