How to write an essay, with sample essays and subjects for essays 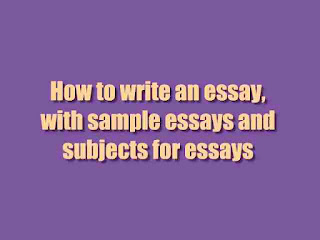 In all Examinations, whether in England or in India, the' Essays more and more being employed as a test of the ability of candidates to write clear, simple, and correct English. Thus we find, " All candidates will be expected to attempt the Essay, which special importance is attached."'

To help the candidate to pass this test with some measure of success is the object of this book. ' -' The eighty " Sample Essays " do not aim at either originality or high literary merit; they are meant ta represent the kind of essays that a student might be expected to write in an Examination. ' And since necessarily no two Avriters are altogether alike in their mode of expressing themselves, the style of these essays has been to some extent diversified.
They also vary in length, because in some examinations short, in others longer. Essays are required of the candidates."The chapter on spelling and Punctuation has for convenience been placed last, but a knowledge of these subjects is, of course, one of the first essentials to a successful composition. Of the 1320 " Subjects for Essays," many have been set in various Public Examinations.

1. Introduction.— Literary composition is the art of ex- pressing thought or feeling effectively by words. The thinking must be done first; ideas and opinions must be formed before the attempt is made to put them into words; the writer should know beforehand exactly what he means. Hence interest and experience in a subject are essential to him.
What he wants, as Professor "Raleigh remarks^ "is not an abundance of facts so much as the connexions between the facts. It is the connexion of things with each other, the ability to go from point to point, which marks literature." Thus the art of composition is governed . by certain principles and methods which the young writer must learn and carry into practice in order to write well.' The aim of the following pages is to explain the most important of these principles with, special reference to the writing of Essays.
2. Classification of Essays. — Essays may be divided into four classes: —
I. Narrative Essays, or Essays that consist of the narration of some event. Such events may be historical or legendary occurrences, or they may be stories true or imaginary, or they may be biographical sketches of some well-known person.
II.' Descriptive Essays, or Essays that consist of the description of someplace or thing. These may be animals, plants,' fruits, or minerals; towns, ports, ships, and buildings of all kinds, like towers, temples, museums, bridges; countries, islands, mountains, seas; rivers, canals; aspects of nature; or, lastly, manufactured articles.
III. Reflective Essays, or Essays that consist of reflection upon some topic, which is generally of an abstract nature. These topics may be habits, qualities, feelings, and capacities; or they may be subjects of a social and political character.
Some writers add a fifth class, viz.. Argumentative Essays; but subjects under this head are comparatively few, and may appropriately be included in Classes III and