How to prepare essays, lectures, articles, books, speeches, and letters, with hints on writing for the press. 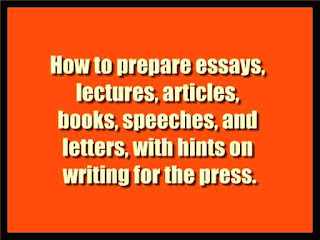 Excerpt
Manu who themselves can easily write excellent Articles or make excellent Speeches, by the light of nature, will utterly fail to teach beginners the art of Writing or Speaking. Indeed, some of the very greatest Essayists have made quite ridiculous attempts to explain how ' Style' can be acquired, or even what it really is. An illustration from elsewhere may show the true reason for this failure.
A player of Billiards sees Roberts making one of his large breaks, or a player of Lawn Tennis sees Doherty make a beautiful stroke from the back of the court; or else perhaps it is Latham who is playing Tennis or Rackets, or it may be some celebrated Cricketer or Rower or Fencer or Boxer.
But, whoever it may be, if he does his work well y then that work will look very easy. The admirer now goes home and tries to imitate what he has seen the skilled player do; in the next game which he plays, he tries to reproduce the stroke but fails lamentably. Why is this? Probably it is chiefly because he does some part or parts of the action wrongly.

A good stroke at Billiards, for example, is a very complex thing. It cannot be perfect unless each part of the stroke is perfect in itself; and unless, at the same time, each part be perfectly combined with the other parts. There must be not only perfect parts but also perfect co-operation or co-ordination of the parts.

The one chance of improvement for an average individual is to find out what these parts are, and then to master them one by one. He must analyze the whole stroke, and must not attempt to do it as if it were a single unit. It is true that the born player, by the light of genius, does the whole stroke as a whole stroke, and perhaps is not aware that it can fee divided into parts: he may even deny it.
None the less it has often been proved that it can be divided into parts, and that to master each part separately is a much easier .process than to -master the whole -at once. It is -not going too far to say that for average people to master the whole stroke at once is an absolute impossibility. Unfortunately, however, a great -deal of our teaching is in the hands of those who do things instinctively and by the light of nature.
They themselves do the whole thing as a whole, all together, and in a single action, and they may do the thing very well indeed. But,, because they do it in this way themselves, it does not in the least follow that this is the best way for others to learn to do it. They themselves are geniuses, and therefore exceptions: most of those who are to be taught are not geniuses but average people, or people below the average. They have to move step by step and with effort over the ground which the genius covers with a flying leap.

And this applies also to Essay- Writing and Speaking. They are very complicated processes and must be practised and conquered part by part before the various parts can be successfully combined together, and before Essay- Writing and Speaking can be done as single processes. Let me take another comparison. Supposing you had to build a house, and only had a pile of bricks, or perhaps only rough-hewn stones of various sizes. How would you set about building your house? We will suppose that you can already put bricks in a line, and even put mortar between them, or arrange rough-hewn stones so that they could make a single wall. Now, in building a house, will you begin by making a room? No, perhaps you will first get a full list of rooms, etc., and then choose just those which you want.

Otherwise, you will probably forget some important room, or you might even forget the staircase. Secondly, you will decide on the size and positions of the various rooms: you will assign to the chief rooms the largest size and the best positions, and you will decide the shape of the rooms also. Now you might begin to build, for now, you have your plan mapped out. Now, also, it would be time to attend to the mortar. Last, of all, there might come the furnishing. But it is obvious that you could not build a house well or easily, unless you had had practice in each one of these departments, in deciding on the rooms, in arranging them, in planning them, in building them, and in furnishing them. Each part would have to be studied by itself, and it is well known that there are specialists who give up their lives to one or two of these several departments, or even to a subdivision of one of them.