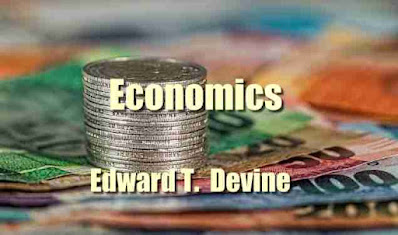 Excerpt:
economics is the science of man in his relation to wealth. By wealth is meant, not as in common speech, a large number of desirable goods, but rather all desirable things in quantity great or small. The unit in economic observations and reasonings is man as a member of a wealth-producing and wealth-using community.
The terms used in the study imply human needs, relations, and activities. The man who is of interest to the economist has need of goods, some of which are given free by nature, some like natural fruits, given free by the community in which he lives, some like the farmer's grain, produced by his own efforts, and some like the food on the mechanic's table, given by the community in return for the product of his labour. The economic man has the capacity for performing useful service of some sort, and for uniting with his fellow-beings on some sensible basis for mutual exchange of services.
A preliminary description of the economic man is necessary: for mastery of this single expression is to the economist what an intelligent appreciation of the character of the cell is to the biologist or an understanding of the school of the soldier to the student of military tactics.
The economic man, then, is a human being. The term is generic, including both men and women; not merely those who are usually called breadwinners, but also the bread preparers. Men and women may do different work, their f place in the economic world may be distinct, but both are included in the term by which we designate the unit with which our study deals.
The economic man, secondly, has material and spiritual wants which are satisfied by means of goods. The quantity and character of goods desired may vary widely at different times and * See Economic Function of IVoman, by the present author, Publications of the American Academy of Political and Social Science. places, furnishing an indication in each case of the particular kind of economic man then and there to be found. Some wants, however, are universal.