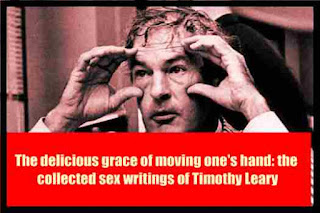 Contents of the book.

Timothy Leary: Sexual Revolutionary -- Author's Introduction: Intelligence Is the Ultimate Aphrodisiac -- Millbrook '66: On Sex, Consciousness, and LSD -- My First Sexual Encounter -- Discovering the Source of All Pleasure -- The Legend of Billy Will -- The Clitoris: 1993 -- Life Is a Southern Exposure -- The Long Search for the Male Elixir -- Hedonic Psychology -- First Official Act as President -- The Persecution of Larry Flynt: 1984 -- Sexy Centerfolds -- Psychedelic Psychology -- The Psychedelic Marriage -- How To Drop Out -- The Hedonic Revolution -- The Hedonic Society of the Future -- Platonic Love Becomes Pretty Real -- Electronic Sex

I was, at the time, a successful robot respected at Harvard, clean-cut, witty, and, in that inert culture, unusually creative. Though I had attained the highest ambition of the young American intellectual, I was totally cut off from the body and senses. My clothes had been obediently selected to fit the young professional image. Even after one hundred drug sessions, I routinely listened to pop music, drank martinis, ate what was put before me. I had "appreciated" art by pushing my body around to "sacred places," but this tourism had nothing to do with direct aesthetic sensation. My nervous system was cocooned in symbols; the event was always second-hand. Art was an academic concept, an institution. The idea that one should live one's life as a work of art had never occurred to me. After we took psilocybin, I sat on the couch in Flora Lu's Elysian chamber, letting my right cerebral hemisphere slowly open up to direct sensual reception. Flora Lu and Maynard started teaching me eroticism the yoga of attention. Each moment was examined for sensual possibility. The delicious grace of moving one's hand, not as part of a learned survival sequence, but for kinesthetic joy.
Timothy Leary loved to turn you on. More than any other major public figure of the 20th century, Timothy Leary behaved that embracing the experience of pleasure especially sexual pleasure was the highest aim of humanity. Many times, over several adventurous decades, he risked everything to prove it. What sent this Springfield, Massachusetts-born boy turned Harvard professor on such a world-class Dionysian quest?
The roots of Leary's ecstatic search may lie in the repressive atmosphere of his youth, and his tragic early marriage. Timothy Leary was born on October 22, 1920, the year prohibition began. He was the son of an alcoholic, abusive military father and a devoutly Irish Catholic mother with a "fanatically religious distrust of men and sexuality." At twelve, his father abandoned him, leaving him a single hundred-dollar bill. It wasn't long before he began testing the limits himself. By 1940, at 20 years of age, Leary left West Point after having been made an example of with a humiliating nine-month code of silence for drinking. His next move, to the University of Alabama, was cut short when he was expelled for sleeping at a girls' dormitory Leary was drafted, became a corporal, married Marianne Busch, and completed a master's in psychology at Washington State University.