Brainwashing; the story of men who defied it 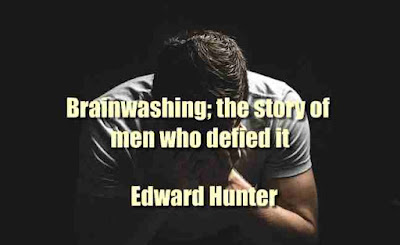 Excerpt:
The new word hraimu ashing entered our minds and dictionaries in a phenomenally short time. This sinister political expression had never been seen in print anywhere until a few years ago. About the only times, it was ever heard in conversation was inside a tight, intimate circle of trusted relatives or reliable friends in Red China during the short honeymoon period of communism.
The few exceptions were when a Red indoctrinator would lose his temper and shout out, "You need a brainwashing." The reason the word was picked up so quickly was that it was not just a clever synonym for something already known, but described a strategy that had yet no name. A vacuum in language existed: no word tied together with the various tactics that make up the process by which the communists expected to create their ''new Soviet man."
The word came out of the sufferings of the Chinese people. Put under a terrifying combination of subtle and crude mental and physical pressures and tortures, they detected a pattern and called it brainwashing. The Reds wanted people to believe that it could be amply described by some familiar expression such as education, public relations, persuasion — or by some misleading term like mind reform and re-education.
None of these could define it because it was much, much more than any one of them alone. The Chinese knew they hadn't just been educated or persuaded; something much direr than that had been perpetrated on them, similar in many peculiar ways to medical treatment. What they had undergone was more like witchcraft, with its incantations, trances, poisons, and potions, with a strange flair of science about it all, like a devil dancer in a tuxedo, carrying his magic brew in a test tube.
The communist hierarchy preferred people to believe that there was no such thing as brainwashing. So long as they could keep it concealed, without a name, opposition to it could be kept scattered and ineffective. As explained by Dr Joost A. M. Meerloo, a psychiatrist of Dutch origin, in his book Conversation and Communication, it is practically im- possible to fight something until it has been given a name. "To name an object is to bring it within the sphere of human control," he wrote. "Without a name, it arouses fear because it is unknown. . . .
Whoever knows the name has power." Dr Meerloo coined the fine laboratory word menticide — the murder of the mind — for this atrocious quack science devised by the Reds to bring about the voluntary submission of people to an unthinking discipline and robotlike enslavement. The popular word remained brainwashing, for it has a flesh-and-blood quality that characterizes any expression arising out of the real-life experience.
The German-born Sinologue, Max Perleberg, who is fluent in both modern and classical Chinese, told me that the term might well have been derived from the Buddhist expression "heart-washing," which goes back to the time of Mencius. Heart-washing referred to the withdrawal into the meditation of a middle-aged man — perhaps weary of worldly cares — living in a bare pavilion in some placid corner of his garden, leaving his offspring to attend to his business.
The reaction among my newspaper colleagues in Hong Kong when the term was first introduced in print was typical of the horror, disbelief, and scepticism that it initially aroused everywhere. These newspapermen were human be- ings like everyone else, part of the public to whom they were reporting, susceptible to the same emotions and holding identical attitudes. An outstanding foreign correspondent came to me at once and exclaimed, "I knew that word!" "Then why didn't you use it?" I asked him.  "Because it's such an ugly word," he retorted feelingly. "I never could persuade myself to put it down on paper." He was telling me the truth. He was a middle-aged man with Latin sensibilities. But make-believe that brainwashing didn't exist could not make it disappear.
Neither could people wish it away, any more than the witch doctor I recently watched in the interior of Ceylon could exorcise the evil spirits of kidney disease out of a Singhalese cook by all-night Kandyan dancing and frenetic tom-tom beating.