Aristotle on his predecessors, being the first book of his Metaphysics 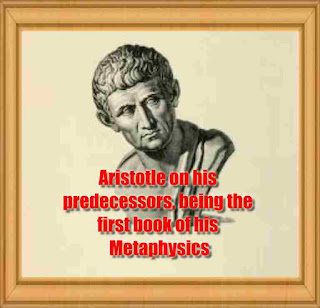 From the introduction:
The present little work makes no ambitious pretence to the originality of any kind. Its object is simply to supply students and teachers of philosophy, especially on the American continent, with a faithful rendering of Aristotle's critical sketch of the history of Greek speculative thought down to his own time. Having experienced the need for such a work in connection with my own lectures at McGill University, I have thought that others of my colleagues may also be glad that they want should be, in however imperfect a manner, remedied.
This cannot, I think, be done by the reissue of any translation, however meritorious in itself, dating from a period in which our knowledge both of the text of Aristotle and of the early history of Greek thought was more imperfect than is at present the case. Accordingly, I submit to the judgment of my colleagues the accompanying new version, originally made for the purposes of my own lectures, trusting that they also may find it of some service.
The translation has been based upon W. Christ's text of the Metaphysics, published in the Teubner series (2nd edition, Leipzig, 1903), and in the very few cases in which I have found it necessary to depart from that text in favour of readings of other critics the fact has been carefully recorded in a foot-note. I have also, except where the contrary is specified, followed the guidance of Christ in the indication of glosses, which are marked in my translation, as in his text, by square brackets.
The brief notes which I have appended to the translation do not in the least aim at providing anything like an editorial commentary. In general, their object is merely to supply either exact information as to the Greek terms represented by certain words in the translation, or to give references that appear indispensable to the comprehension of the author's meaning.
Here and there in the pages which deal with the Platonic theory of Ideas, I have, indeed, allowed myself to transgress this self-imposed limitation, and can only plead in excuse the abstract character of the topics treated of and the unfamiliar form of their presentation.
With regard to the style of the translation, I would only say that, while I have tried to reproduce as nearly as I can the effect upon my own mind of Aristotle's characteristic manner of exposition, and in particular, to find some single stock translation for each technical expression of the Peripatetic system which occurs in our book, I have found it quite impossible to produce, in the rigid sense, a "word-for-word" rendering. I have constantly been obliged, from the exigencies of readable English prose, to vary the English equivalents employed for certain Greek phrases words of ambiguous signification.

Preface ...... 3
Introduction :
I. Life of Aristotle I3
II. The Metaphysics i?
III. Historical Value of Aristotle's Criticism . . 29
Summary ......••• 45
Chronological Table of the Pre-Aristotelian Philosophers Referred to in Metaphysics A . . • 5^
Books of Reference ...... 60
Aristotle on his Predecessors:
Chapter I. The Origin of Knowledge and Wisdom
(Philosophy) 67
Chapter II. General Character of Wisdom . . 72
Chapter III. Four Kinds of Causes: A Review of Their Treatment in the Past ... 78
Chapter IV. Teleology and the Formative Principle 86
Chapter V. Mathematicians, Pythagoreans, and Eleatics 91
Chapter VI. The Peculiarities of Plato . . .100
Chapter VII. The Four Conceptions of Cause United
in Aristotle . . . . 105
Chapter VIII. The Defects of the Pre-.\ristotelian Systems ......
Chapter IX. ..Criticism of Plato . . . 116
Chapter X. Conclusion ...... 138
Appendix A. On the Cognition of Universal .^.xioms, as Product of Experience . . . . . '43
Appendix B. The Four Senses of Cause . . . i49
Appendix C. A Popular Resume of the Main Arguments
Against the Platonic Ideas, with Special Reference to the "Idea of Good" 153
Appendix D. The Alleged Difficulty in the Connection of
Mathematics with the Doctrine of Ideas .... 155
Index to Proper Names ...... 160
Book details
Download 5.5 MB