A protest against agnosticism; the rationale or philosophy of belief 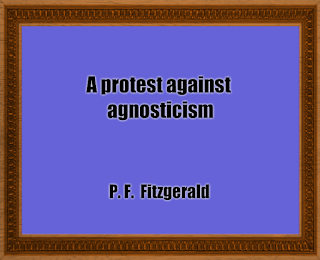 From Introduction:
my one object in addressing the public in each one of my works has been to show that our reflective self-consciousness of the faculties, or attributes of Being, is not only as legitimately the subject-matter of science as are the physical forces, but that, as the condition of all science, it claims the title of the science of sciences.
For even in our trusting, or believing in the evidence of our senses, the exercise of the fundamental rational concepts of the understanding is involved, they in fact constitute our understanding. Therefore we need not hesitate to follow the sense- transcending lead of our emotional, intellectual, and moral faculties, pointing as they do to the haven or heaven of our desire. " Psychical laws are more radical than physical laws." It is psychical laws, and not mere physical laws of movement, that must furnish the ground of a philosophical theory of evolution.
In my former works on Metaphysics, entitled respectively " An Essay on the Philosophy of Self-Consciousness" and "A Treatise on the Principle of Sufficient Reason," I have endeavoured to show the rationality of Faith, Love, and Hope.
The last work on which I have been engaged has for its object the exhibition of the genesis of the fundamental concepts of the human understanding; but illness having impeded its publication, I am now offering to the public the introduction to it, as affording a resume, or concise statement of my theory of thought, or spontaneous mental representation, together with my notion of reflective abstract cognition, and sense - transcending speculative inference therefrom.
Stated in a tabular form, my theory of the principles of mental representation stands thus: The idea or notion is of Being, which is apperceived in reflection on the three faculties, whose mental representations constitute the Principles of Thought,