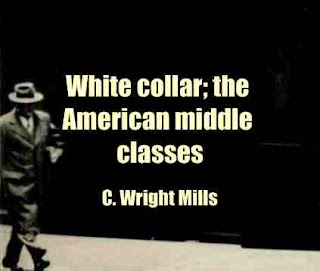 From the introduction:
The white-collar people slipped quietly into modern society. Whatever history they have had is history without events; whatever common interests they have do not lead to unity; whatever future they have will not be of their own making. If they aspire at all it is to a middle course, at a time when no middle course is available, and hence to an illusory course in an imaginary society. Internally, they are split, fragmented; externally, they are dependent on larger forces. Even if they gained the will to act, their actions, being unorganized, would be less a movement than a tangle of unconnected contests.
As a group, they do not threaten anyone; as individuals, they do not practice an independent way of life. So before an adequate idea of them could be formed, they have been taken for granted as familiar actors of the urban mass.
Yet it is to this white-collar world that one must look for much that is characteristic of twentieth-century existence. By their rise to numerical importance, the white-collar people have upset the nineteenth-century expectation that society would be divided between entrepreneurs and wage workers. By their mass way of life, they have transformed the tang and feel of the American experience.
They carry, in a most revealing way, many of those psychological themes that characterize our epoch, and, in one way or another, every general theory of the main drift has had to take account of them. For above all else they are a new cast of actors, performing the major routines of twentieth-century society: At the top of the white-collar world, the old captain of industry hands over his tasks to the manager of the corporation. Alongside the politician, with his string tie and ready tongue, the salaried bureaucrat, with a briefcase and a slide rule, rises into political view.
These top managers now command hierarchies of anonymous middle managers, floorwalkers, salaried foremen, county agents, federal inspectors, and police investigators trained in the law. In the established professions, the doctor, lawyer, engineer, once was free and named on his own shingle; in the new white-collar world, the salaried specialists of the clinic, the junior partners in the law factory, the captive engineers of the corporation have begun to challenge free professional leadership. The old professions of medicine and law are still at the top of the professional world, but now all around them are men and women of new skills.
There are a dozen kinds of social engineers and mechanical technicians, a multitude of girl Fridays, laboratory assistants, registered and unregistered nurses, draftsmen, statisticians, social workers. In the salesrooms, which sometimes seem to coincide with the new society as a whole, are the stationary salesgirls in the department store, the mobile salesmen of insurance, the absentee salesmen— ad-men developing others sell from a distance.
At the top are the prima donnas, the vice presidents who say that they are 'merely salesmen, although perhaps a little more creative than others,' and at the bottom, the five-and-dime clerks, selling commodities at a fixed price, hoping soon to leave the job for marriage. In the enormous file of the office, in all the calculating rooms, accountants and purchasing agents replace the man who did his own figuring.
Some Contents:
1. The World of the Small Entrepreneur, 3
1. The Old Middle Classes, 3
2. Property, Freedom and Security, 7
3. The Self-Balancing Society, 9
2. The Transformation of Property, 13
1. The Rural Debacle, 15
2. Business Dynamics, 20
3. The Lumpen-Bourgeoisie, 28
3. The Rhetoric of Competition, 34
1. The Competitive Way of Life, 35
2. The Independent Farmer, 40
3. The Small Business Front, 44
4. Political Persistence, 54
TWO: WHITE COLLAR WORLDS
4. The New Middle Class: I, 63
1. Occupational Change, 63
2. Industrial Mechanics, 65
3. White-Collar Pyramids, 70
5. The Managerial Demiurge, 77
1. The Bureaucracies, 78
2. From the Top to the Bottom, 81
3. The Case of the Foreman, 87
4. The New Entrepreneur, 91
5. The Power of the Managers, 100
6. Three Trends, 106
book details : Download 13 MB