The Sikh religion, its gurus, sacred writings and authors 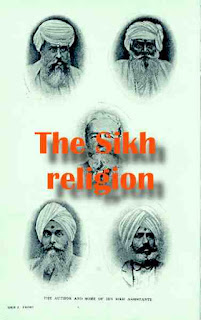 I bring from the East what is practically an unknown religion. The Sikhs are distinguished throughout the world as great military people, but there is little known even to professional scholars regarding their religion. I have often been asked by educated persons in countries which I have visited, and even in India itself, what the Sikh religion was, and whether the Sikhs were Hindus, idolaters or Muhammadans.
This ignorance is the result of the difficulty of the Indian dialects in which their sacred writings are contained. Judaism has its Old Testament; Islam its Quran; Hinduism its Veds, Purans, and Shastras; Buddhism its Tripitaka; the Parsi religion its Zend- Avesta; and Confucianism its Analects, its Spring and Autumn, its Ancient Poems and its Book of Changes.
The languages in which the holy writings of these religions are enshrined, though all difficult, are for the most part homogeneous, and after preliminary study with tutors can generally be mastered by the aid of grammars and dictionaries; but not so the mediaeval Indian dialects in which the sacred writings of the Sikh Gurus and Saints were composed. Hymns are found in Persian, mediaeval Prakrit, Hindi, Marathi, old Panjabi, Multani, and several local dialects. In several hymns, the Sanskrit and Arabic vocabularies are freely drawn upon.
There were no dictionaries of the Granth Sahib, 1 or sacred book of the Sikhs, when the author commenced his labours. Some have been since published, but each lexicographer has adopted a system of his own which makes it difficult to find the word required, and even when found the interpretation is not always satisfactory.
For these reasons it is necessary for the translator of the Sikh sacred writings to reside for long years in India, and work with the assistance of the few gyanis, or professional interpreters of the Sikh canonical writings, who now survive. It would probably be an exaggeration to say that there are ten such men in the world. Of these few or none is capable of giving an English interpretation.
They generally construe tedious paraphrases in their own local dialects. But more than this, there is hardly anyone Sikh who is capable of making a correct translation of his sacred writings. A man who is a good Sanskrit scholar will not know Persian and Arabic, and he who knows Persian and Arabic will not know words of Sanskrit derivation. A man who knows Hindi will not know Marathi; a man who knows Marathi will not know Panjabi and Multani, and so on. Moreover, there are words in the Sikh sacred writings which are peculiar to them and cannot be traced to any known language. As to these one must accept the traditional interpretations.
The Granth Sahib thus becomes probably the most difficult work, sacred or profane, 1 Sahib is an Arabic word meaning lord or master. It is applied by Indians to Europeans and natives of position, but it is particularly used by the Sikhs to denote a thing revered or holy, as Darbar Sahib, the holy Sikh Darbar or temple at Amritsar, the Granth Sahib, the sacred book of the Sikhs, that exists, and hence the general ignorance of its contents. A portion of the Granth Sahib was translated some years since by a German missionary at the expense and under the auspices of the India Office, but his work was highly inaccurate and unidiomatic, and furthermore gave mortal offence to the Sikhs by the odium theologicum introduced into it.
Whenever he saw an opportunity of defaming the Gurus, the sacred book, and the religion of the Sikhs, he eagerly availed himself of it. One of the main objects of the present work is to endeavour to make some reparation to the Sikhs for the insults which he offered to their Gurus and their religion. There are, however, many other advantages which I am hoping for, and which will probably be understood by the reader.
book details : Download Volume 1