The Fathers of Greek philosophy 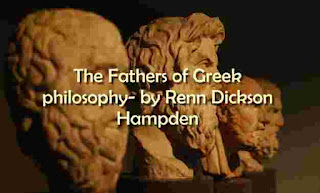 The substance of the following work has been already presented to the public in several Articles by the Author, which have appeared successively under the titles of Aristotle, Plato, and Socrates, in a recent edition of the Encyclopcedia Britannica.
As these Articles all related to one definite period in the History of Ancient Philosophy, and are intimately connected with one another ; it was suggested to the Author, that they might advantageously be combined as a whole in a separate Volume.
For this purpose, accordingly, a revision of them has been undertaken, and considerable additions have been made under each head of the Inquiry ; so as to convey, it is hoped, a more accurate and full information con cerning the state of Philosophy during the period in question.
In contemplating this period as a whole, there can be no doubt that the philosophy of Aristotle occupies the foreground ; whether we regard it, as giving a systematic form, and definite expression, to what had been before, either indiscriminately taught, or only sketched in out line and shadow, under the general name of Philosophy, by his immediate predecessors ; or refer to its established empire in the world, and its effects subsisting even in our own times ; especially as these are manifested in VI the high authority still attributed to those masterly works, the Treatises of Logic, Ehetoric, and Ethics, the glory of his philosophic genius.
The attention of the reader has therefore been natu rally directed to Aristotle in the first instance. Next, on the same principle, would follow the inquiry into the Philosophy of Plato ; as, in like manner, the development of the teaching of Socrates, so far as it was a consequence of that teaching. Looking, thus, at the results of the lines of thought and tendencies existing in their ante cedents, we shall be better enabled to trace out the respective contributions of each Philosopher to the com mon result. By thus prosecuting the order of study, we shall be acting in the spirit of that direction of the greatest of modern philosophers ; where he bids us, if we would rightly estimate any particular science, not " stand on the level with it, but climb up, as it were, into the watch-tower of some higher science," and so, taking the prospect of it from above, explore the more remote, as well as the more interior, parts of it, then made apparent to the view.
Download The Fathers of Greek philosophy -23 MB -PDF ebook