The education of the will 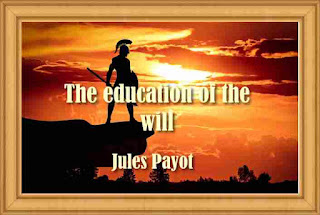 the theory and practice of self-culture

This universal neglect of the will has attracted the attention of physicians. But these physicians of the mind are unfortunately permeated with the prevalent doctrines of psychology. In the matter of the will, they attribute special importance to intelligence. They argue that what we lack is a metaphysical theory substantiated from the outside. Their ignorance is quite excusable. It is a law recognized in political economy that cultivation always shifts from the ground which is the softest but most unproductive to that which is the most fertile but the hardest to till.
The same rule applies in the field of psychological science. Before approaching the essential phenomena, the explanation of which is difficult, a study has been made of the simplest appearances, the conduct of which is of little im- portance. It is difficult to realize how insignificant is the influence on the character of a simple idea.
The will is a sentimental power,  and every idea, in order to influence it, has to be coloured with passion. If the mechanism of the will is studied at close quarters, it will be seen that metaphysical theories are of little importance and that there is no inclination deliberately followed which is not capable, by the intelligent use of our psychological resources, of influencing our entire life. A miser sacrifices every physical satisfaction; he eats poor food, sleeps on a hard bed, lives without friends, without pleasures, all for the love of money.
This being the case, why should not an idea less degraded have the power of shaping our destiny? The fact is, that one does not realize how varied are the means offered by psychology to give us the power of becoming what we would like to be. Unfortunately, up to the present time very little attention has been given to the study of our resources from this point of view. The spirits which have directed the train of European thought for the last thirty years have been divided into two theories, which are the pure and simple antitheses of the theory of the education of the will. The first consists of treating character as an immovable block over which we have no control. This infantile theory will be dealt with later on.
The second seems apparently in keeping with the education of the will. It is the theory of the free agent. Stuart Mill himself x goes so far as to say that this theory has given its supporters a keen perception of "personal culture/' In spite of this assertion of a de- terminist, we do not hesitate in considering the theory of the free-agent as dangerous to the mastery of self as is the preceding one, and as definitely discouraging. It has, in fact, led one to consider self-enfranchisement as something easy and natural when it is, in reality, a task of long duration, a task that requires much patience, and which demands a very precise knowledge of psychological resources.
This method, it must be borne in mind, is in no way meta-physical. It does not exclude psychology from metaphysics, but simply metaphysics from psychology, which is a very different matter. It consists in treating psychology as a science.
The aim of the scholar is not simply to acquire knowledge but to turn his knowledge to account. The fact that the undulatory theory of light is only an unverifiable hypothesis, is of little value to the physician so long as the hypo- thesis succeeds; and what does it matter to the psychologist if his hypothesis for in- stance, the hypothesis of the absolute correlation of the nervous and psychologic states is unverifiable so long as it succeeds?
To succeed, to be able to anticipate events, to turn them to our advantage, and in a phrase to shape our destiny here is the role of the scholar, and hence that of the psychologist. This, at least, is the conception we have formed of our task.