Taboo and genetics, a study of the biological, sociological and psychological foundation of the family 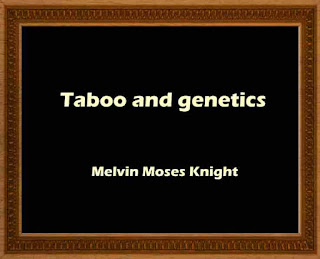 scientific discovery, especially in biology, during the past two decades, has made necessary an entire restatement of the sociological problem of sex. Ward's so-called "Gynocentrism" theory, as sketched in Chapter 14 of his Pure Sociology, has been almost a bible on the sex problem to sociologists, in spite of the fact that modern laboratory experimentation has disproved it in almost every detail.
While a comparatively small number of people read this theory from the original source, it is still being scattered far and wide in the form of quota- tions, paraphrases, and interpretations by more popular writers. It is therefore necessary to gather together the biological data which are available from technical experimentation and medical research, in order that its social im- plications may be utilized to show the obsolete- ness of this older and unscientific statement of the sex problem in society. In order to have a thoroughly comprehensive survey of the institutions connected with sex- ual relationships and the family and their en- tire significance for human life, it is also necessary to approach them from the ethnological and psychological points of view.
The influence of the primitive sex taboos on the evolution of social mores and family life has received too little attention in the whole literature of sexual ethics and the sociology of sex. That these old customs have had an inestimable in- fluence upon the members of the group, modern psychology has recently come to recognize.
It, therefore, seems advantageous to include these psychological findings in the same book with the discussion of the sex taboos and other material with which it must so largely deal. These fields biology, ethnology, and psychology are so complicated and so far apart technically, although their social implications are so closely interwoven, that it has seemed best to divide the treatment between three different writers, each of whom has devoted much study to his special phase of the subject.
This leads to a very simple arrangement of the material. The first part deals with the physical or biological basis of the sex problem, which all societies from the most primitive to the most advanced have had and still have to build upon.
The second part deals with the various ideas man has developed in his quest for a satisfactory adaptation of this physical basis to his own requirements. Part three attempts to analyze the effect of this long history of social experimentation upon the human psyche in its modern social milieu.

Some contents of the book :

PART I
'BY M. M. KNIGHT, PHD.
THE NEW BIOLOGY AND THE SEX PROBLEM IN SOCIETY
I. THE PROBLEM DEFINED 3
What is sex? A sexual and mixed reproduction. Origin of sexual reproduction. Advantages of sex in the chance of survival. Germ and body cells. Limitations of biology in social problems. Sex is always present in higher animals. Sex in mammals is a problem in the human species. Application of the laboratory method. _ I
I. SEX IN TERMS OF INTERNAL SECRETIONS . 21
Continuity of germplasm. The sex chromosome. The internal secretions and the sex complex. The male and the female type of body. How the removal of sex glands affects body type. Sex determination. Share of the egg and sperm in inheritance. The nature of sex sexual selection of little importance. The four main types of secretory systems. Sex and sex instincts of rats modified by surgery. Dual basis for sex. Opposite sex basis in every individual. The Free-Martin cattle. Partial reversal of sex in* human species. ^
III. SEX AND SEX DIFFERENCES AS QUANTITATIVE 68
Intersexes in moths. Bird intersexes. Higher metabolism of males. The quantitative difference between 6ex factors. Old ideas of intersexuality. Modern surgery and human intersexes. Quantitative theory a Mendelian explanation. The peculiar complication in the case of man. Chemical life-cycles of the sexes. Functional-reproductive period and the sex problem. Relative significance of physiological sex differences.
IV. SEX SPECIALIZATION AND GROUP SURVIVAL 102
Adaptation and specialization. Reproduction a group-^-not an individual problem. The conflict between specialization and adaptation. Intelligence makes for the economy in adjustment to the environment. Re- production, not production, is the chief factor in the sex problem.
V. RACIAL DEGENERATION AND THE NECESSITY FOR RATIONALIZATION OF THE MORES 114
Racial decay in modern society. Purely "moral" control is dysgenic in a civilized society. New machinery for social control. The mistaken notion is that reproduction is an individual problem. Economic and other factors in the group problem of reproduction
.
PART II
BY IVA LOWTHER PETERS, PHD.
THE INSTITUTIONALIZED SEX TABOO
I. THE PRIMITIVE ATTITUDE TOWARD SEX AND WOMANHOOD 131
Primitive social control. Its rigidity. Its necessity. The universality of this control is in the form of taboos. The connection between the universal attitude of primitive peoples toward women is shown in the Institutionalized Sex Taboo and the magico-religious belief in Mana. Relation of Mana to Taboo. Discussion of Sympathetic Magic and the associated idea of danger from contact. Difficulties in the way of an inclusive definition of Taboo. Its dual nature. Comparison of concepts of Crawley, Frazer, Marett, and others. A conclusion is that Taboo is Negative Mana. Contribution of modern psychology to the study of Taboo. Freud's analogy between the dual-
Download Taboo and genetics - 11 MB