The Projection of The Astral Body 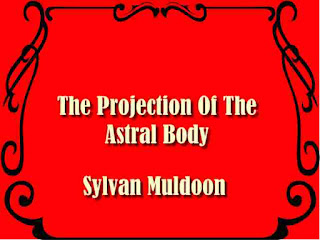 The Astral Body may be defined as the Double, or the ethereal counterpart of the physical body, which it resembles and with which it normally coincides. It is thought to be composed of some semi-fluidic or subtle form of matter, invisible to the physical eye. It has, in the past,, been spoken of as the etheric body, the mental body, the spiritual body, the desired body, the radiant body, the resurrection body, the double, the luminous body, the subtle body, the fluidic body, the shining body, the phantom, and by various other names.
In recent Theosophical literature, distinctions have been made between these various bodies; but for our present purposes, we may ignore these distinctions, and speak of the “ Astral Body ” as some more subtle form, distinct from the organic structure known to Western science, and studied by our physiologists. The broad, general teaching is that every human being " has ” an astral body just as he has a heart, a brain and a liver.
In fact, the astral body is more truly the Real Man than the physical body is, for the latter is merely a machine adapted to functioning upon the physical plane. But it must not be thought that the astral body is held to be the Soul of man either.
That is a mistake often made. It is said to be the vehicle of the Soul — just as truly as the physical body is a vehicle — and constitutes one of the essential connecting- links between mind and matter. To the Materialist, of course, who regards the mind merely as a product of certain brain activities, such a theory would appear superfluous and nonsensical. But the present book is not addressed to Materialists. It is addressed to those who believe in the reality of certain supernormal (psychical) phenomena, and in the theoretical possibility, at least, of the astral body.
To all such students, this book will, I am assured, prove a veritable mine of valuable and unique information.
When my first out-of-the-body experiences occurred I was but twelve — so young and immature in mind that I did not realize their magnitude.
The occurrences came about involuntarily and repeated themselves frequently, until I became so accustomed to them that, as a matter of fact, I soon regarded them as nothing extraordinary and seldom mentioned them even to members of my own family, to say nothing of keeping a record of them, although I had been urged to do so by many interested persons. I had been told, by persons professing to know, that conscious projection of the astral body was nothing unusual and that many psychics could produce it at will. I, too, wanted to be able to produce it at will, and I admit that I was envious of those who (I had heard) could do so.
So I began a search for someone who could produce the phenomenon voluntarily. But my search proved fruitless, and eventually, I concluded that I could not find that "someone."
Thus I began to experiment with the phenomenon myself, and in this book, you will find the results of my experiments. Although we are living in the twentieth century we still have with us the intolerance of the Middle Ages, and I am not optimistic enough to believe that a great many will resume without prejudice what I have to say. I have written this work with the idea of giving the results of my findings to other students of the occult.
Unfortunately many occultists are of the belief that what is claimed to be conscious astral projection is nothing more nor less than a dream. I am well aware of the fact that one must first experience conscious astral projection before he can believe in it, and I confess that I should not accept it as true myself, perhaps, had I not experienced it and know it to be true.
The sceptic says, " I want the proof, the objective proof, then I will believe it! " And the projector replies, " You cannot have objective proof. You must experience it, then you will have the proof." The argument that the projector cannot prove to the sceptic that it is not a dream is of no avail; for neither can the sceptic prove to the projector that it is a dream. Thus the argument is useless— as useless as arguing the matter of a first cause or the last effect! I stand on a clear-cut issue.
I say experience it. " The proof of the pudding is in the eating!" I have not tried to conceal anything nor resorted to pseudo-arguments about the “ dangers ” involved, which is a common characteristic of most writers on this subject. I have given the specific methods for bringing about the projection of the astral body, as I know them, and I am willing to have the truth of my statements judged squarely by the results obtained through the practice of these methods.
You want proof, and. I say you can have it— but you must experience it. You want to know how you can experience it, and I tell you how to go about it. I can do no more. In this volume I have related many of my experiences; however, the experiences I have given do not in any way represent all which I have had; a book this size could scarcely hold the accounts of all of them. I could never have gleaned the information which is contained herein by the few experiences which I have quoted.

the book details : Download The Projection Of The Astral Body- 29 MB -PDF ebook