Is life worth living? a debate 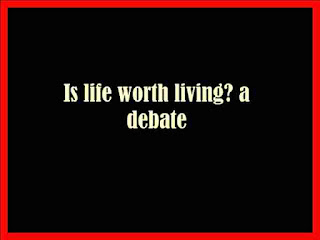 The Chairman: These two gentlemen have met before on this platform in the discussion. I hope they will meet again. I think you will have the privilege probably next fall. The last debate was on the question: Is the Human Race Getting Anywhere? The debate today is on a question that interests us all and has to do with the great philosophy of pessimism, of which Mr Clarence Darrow is the greatest living exponent.
The day which brings these two central suns in conjunction is a wonderful day. The question: Is Life Worth Living? is the question to be discussed today.
The debate will be opened by our distinguished friend, the greatest anthropologist the world possesses today, Professor Frederick Starr, of the Chicago University. Professor Frederick Starr said: The subject we are to discuss today is very simply worded and it can be "very simply discussed. It would be possible, of course, to indulge in^ any flight of oratory, to reach any depth of philosophy, in a discussion of this question, but it is not necessary either to indulge in oratory or in philosophy. I hope I shall present some facts that are worth thinking about.


Is Life Worth Living? And before we take up the discussion of the question at all, I want to emphasize what the question is not. I suspect that we are going to beat a great deal about the bush in this discussion instead of getting right down to the central thought, which is mere:
Is Life Worth Living? Now, there are three things I want to call attention to as not involved in the discussion. First I want to say that we are not called upon in this discussion today to tell where man came from or whether it is fortunate that he came or how he came; nor is it for us to say where he is going, or what comes hereafter. These things form no part of the question, Is Life Worth Living.
In the second place, I would call your attention to the fact that we believe — and when I say "we believe" I mean this audience believes because I know just what this audience is; I know its attitude toward things — this audience believes that mankind has come into being through the operation, through ages, of certain influences and causes. Mankind is the result of operations that have been going on through a long period of ages. Well, now, mankind is becoming, has been adapted to these conditions. In other words, mankind fits; mankind must fit.
It is inconceivable that man should exist unless he fits the situation in which we find him, and, it is in- conceivable that he should continue unless he fits into the condition that we find him. In other words, if we believe, and we do believe, that man is the product of evolution ~ he can- not possibly be a misfit in the surroundings in which he exists. If he should be so he would disappear and die; if he ceases to fit if he ceases to be in harmony with his surround.
Debaters: Frederick Starr — Clarence Darrow
Publication Date:1925