Hydraulics and its applications 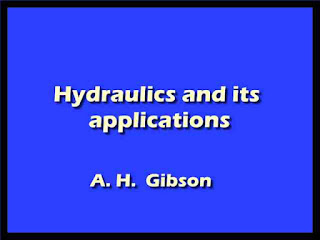 water a perfectly non-viscous, inelastic fluid, whose particles, when in motion, always followed sensibly parallel paths, Hydraulics would be one of the most exact of the sciences. But water satisfies none of these conditions, and the result is that in the majority of cases brought before the engineer, motions and forces of such complexity are introduced as baffle all attempts at a rigorous solution.
This being so, the best that can be done is to discuss each phenomenon on the assumption that the fluid in motion is perfect and to modify the results so obtained until they fit the results of the experiment, by the introduction of some empirical constant which shall involve the effect of every disregarded factor. It is worthwhile here impressing on the student of the science that, apart from these experimentally-deduced constants, his theoretical results are, at the best, only approximations to the truth, and may, if care be not taken in their interpretation, be actually misleading.
On the other hand, it may be well to answer the criticism of those who would cavil at such theoretical treatment, by pointing out that the results so obtained provide the only rational framework on which to erect the more complete structure of Hydraulics. In the following pages an attempt has been made to consider the science, and its application to the design of Hydraulic Machinery, in a manner suitable for a student who has some initial knowledge of mechanics.
While written primarily with the needs of a student in view, it is, however, hoped that the book may prove of value to such as are actively engaged in the practice and profession of Hydraulic Engineering. Although it has not been attempted to elude the largely imaginary difficulties of a mathematical treatment involving some knowledge of the Differential and Integral Calculus, the knowledge of this subject is necessary for a thorough grasp of the greater part of the book is very slight. Where, as in Arts. 23, 24, 35 and 62, a somewhat more extended mathematical knowledge is required, the work is such as may safely be left by all but the more advanced student of the subject.
In the section devoted to Hydraulic Machinery, it has not been attempted to deal in any way exhaustively with the subject, and only such machines have been illustrated or described as are typical of their class, represent good modern design, and illustrate some definite principle of construction. For many of these illustrations, the Author is indebted to the manufacturers, and while reference has been made to these in the text, he would take this opportunity of thanking them collectively for the help which they have so courteously tendered.
As was essential, reference has been freely made to the minutes of the proceedings of the various English and American societies, and to the English and German technical press, as well as to standard works on the subject.
Of these, the author is particularly indebted to the Councils of the Institution of Civil Engineers, the Institution of Mechanical Engineers, the American Society of Civil Engineers, the Zeitschrift des Vereins Deutscher Ingeiiieure, The Engineer, and Engineering. The greatest debt of all is, however, owing to the teachings and published papers of his old professor and some time chief, Osborne Reynolds. Old students of the Professor will readily
recognise to what extent any slight merit which the book may possess is due, directly or indirectly, to the influence of one to whom the science of Hydraulics owes so much. In conclusion, the Author would tender his thanks to Mr S. Chapman, to Mr E. Magson, and to his colleagues, Mr C. H. Lander and Mr F. Pickford, of the Manchester University, each of whom has revised a portion of the proofs, and to whose kindly criticism and direction the book owes much.
Contents :
I. Hydrostatics.--II. Hydraulics.--III. Hydraulic machinery
book details : Download 39 MB - PDF ebook