How they succeeded: life stories of successful men told by themselves. 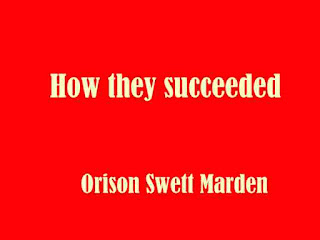 THE GREAT INTEREST manifested in the life- stories of successful men and women, which have been published from time to time in the magazine SUCCESS, have actuated their production in book form. Many of these sketches have been revised and rewritten, and new ones have been added.
They all contain the elements that make men and women successful; and they are intended to show that character, energy, and an indomitable ambition will succeed in the world and that in this land, where all men are born equal and have an equal chance in life, there is no reason for despair. I believe that the ideal book for youth should deal with concrete examples; for that which is taken from real life is far more effective than that which is culled from fancy.
Character-building, its uplifting, energizing force, has been made the basic principle of this work. To all who have aided me I express a grateful ac- knowledge; and to none more than to those whose life- stories are here related as a lesson to young people. Among those who have given me special assistance in securing those life-stories are, Mr. Harry Steele Morrison, Mr. J. Herbert Welch, Mr. Charles H. Garrett, Mr. Henry Irving Dodge, and Mr. Jesse W. Weik. I am confident that the remark-able exhibit of successful careers made in this book careers based on sound business principles and honesty will meet with appreciation on the part of the reading public.
This world-renowned merchant is not easily accessible to interviews, and he seeks no fame for his business achievements. Yet, there is no story more significant, none more full of encouragement and inspiration for youth. In relating it, as he told it, I have removed my own interrogations, so far as possible, from the interview. " I was born in Conway, Massachusetts," he said, " in 1835.
My father's farm was among the rocks and hills of that section, and not very fertile. All the people were poor in those days. My father was a man who had good judgment, and he made a success out of the farming business. My mother was of a more intellectual bent. Both my parents were anxious that their boys should amount to something in life, and their interest and care helped me. How They Succeeded " I had but few books, scarcely any to speak of.
There was not much time for literature. Such books as we had, I made use of. " I had a leaning toward business and took up with it as early as possible. I was naturally of a saving disposition: I had to be. Those were saving times. A dollar looked very big to us boys in those days; and as we had difficult labour in earning it, we did not quickly spend it. I, however,
" Did you attend both school and college? " I attended the common and high schools at home, but not long. I had no college training. Indeed, I cannot say that I had much of any public school education. I left home when seventeen years of age, and of course had not time to study closely.


the book details : Download How they succeeded- PDF ebook