The religions of India 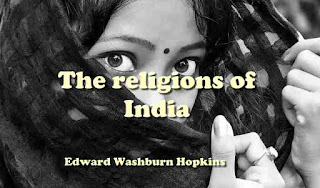 It has been said somewhere by Lowell that " an illustration is worth more than any amount of discourse," and, if we were asked to specify in which regard we thought that this manual, when compared with the only other book that covers the same ground, was likely to be useful, we should reply that, whereas Barth in his admirable handbook (the out-growth of an article in the Encyclopedia des Sciences Religieiises) aimed at making his reader know all about the religions of India, we have sought to make our reader know those religions.
We have tried to show the lines on which developed the various theological and moral conceptions of the Hindus, not only by furnishing, from the point of view of a foreign critic, an annotated narrative of the growth of these conceptions, but also and chiefly by taking the reader step by step through the literature that contains the records of India's dogmas. The scheme of Earth's Religions excludes all illustrative matter. His reader must take as authoritative the word of some modern scholar, or he must look up for himself the texts to which occasional reference is made.
By omitting all quotations the author was enabled, in the compass of a small volume, to give an account, extraordinarily compact and complete, of every ramification of Hindu belief, and his book deserves all the praise that it has won. It is invaluable as exegesis. But it presents the religions of India as Bernhardy exhibits the literature of Greece, or as the daylight lecturer describes invisible stars. If one desires to orient himself in respect of any point of the Hindu creeds, if he v/ish a reliable sketch of those creeds, he x will obtain from Barth the information he is seeking, and find a survey not only traced in detail, but at the same time discussed in so masterly a way as to make superfluous for long any new resume of the sort, withal despite the fact that in some regards Earth's views have become obnoxious to later criticism. But it is not to criticize Barth that this book was written.
It is to reveal the religions of India by causing them to reveal themselves, and to elucidate them by commenting on them as they appear before the reader, traverse his field of vision, and finally leave his sight.
We admit that it behooves whoever writes under the same title with that of the French savant, to show cause why he does so; but we think that to open up the religions of India from within, and in orderly succession to explain to them as they display themselves, will not be otiose if there be any students ignorant of Sanskrit who yet desire independently to examine and to make their own the very words of the Hindu sages.
In accordance with this plan of teaching Hindu religions, we have been more prone to ignore than to collect such results of modern scholarship as tend to blur the picture we would show. For the first view of Greek theology, Homer is more useful than Preller, and the same is true elsewhere. Above all, as we have said in the Introduction, in regard to many a recent 'interpretation' of Hindu deities, we are content to be conservative.
We doubt the historical value of most of these expositions, and, since we are not of those scholars that try to keep abreast of the times by swallowing every new idea, we have not been inclined to broach unsatisfactory theories without a good deal of provocation, which existed for us only in the case of one or two Vedic divinities, where the religious significance of new interpretations compelled attention.
Publication date: 1904
Publisher Boston, Ginn
Download 25 MB PDF ebook