A study of ethical principles by James Seth 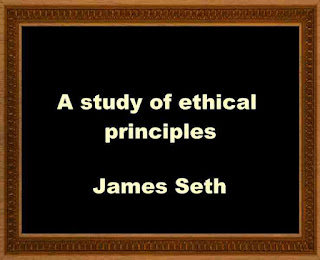 In this volume, which is the outcome of several years of continuous reflection and teaching in the department of ethics, all effort has been made to re-think the entire subject and to throw some light upon the real course of ethical thought in ancient and modem times.
The author has been anxious, in particular, to recover, and, in some measure, to re-state the contribution of the Greeks, and especially of Aristotle, to moral science. The use of two terms calls for a word of explanation. I have distinguished ' Eudaemonism ' from 'Hedonism,' and adopted the former term to characterize my own position.
Though these two terms are often identified, some writers have been careful to discriminate between them; and it seemed to me most important, for reasons which will appear, to follow their example, and to use ' Eudaemonism ' in its original or Aristotelian sense.
The second point is the distinction drawn between ' the individual ' and ' the person.* This distinction comes, of course, from Hegel; but, in giving it a leading place to the Third Edition in the discussion, I am following the example of Professor Laurie of Edinburgh in his Ethica, or the Ethics of Season, a book to which I probably owe more than to the work of any other living writer on ethics. My other obligations I have tried to acknowledge in the course of the book, but it is difficult to make such acknowledgments complete.
I have to thank my former colleague, Professor Walter G. Everett, of Brown University, for many helpful suggestions made while the work was in manuscript, and my brother, Professor Andrew Seth, of the University of Edinburgh, for his aid and advice while the original edition was passing through the press. In the present edition, several important changes have been made. The new chapter on " The Method of Ethics " explains the more limited view of the science which further reflection has forced upon the writer.
The retention of the Third Part, " Metaphysical Implications of Morality," is due to the writer's continued belief in the intimate relation of ethics to metaphysics. The discussion of the place of pleasure, psychological and ethical, has been carried further than in the first and second editions. Use has been made of an article published in The International Jov/mal of Ethics, July 1896.
A new chapter, on "Moral Progress," has been added to the Second Part. For the assistance of students, a sketch of the literature of the subject has been appended to each chapter, and an index has been added. It is hoped that these and other minor changes Preface to the Sixth Edition ix may make the volume more acceptable to those teachers who have done it the honor of adopting it as a textbook. In the preparation of this edition, and especially of the new chapter on " Moral Progress," the author desires to acknowledge his special obligations to Dr. David Irons, of the department of philosophy in this University.
Download A study of ethical principles by James Seth  PDF ebook