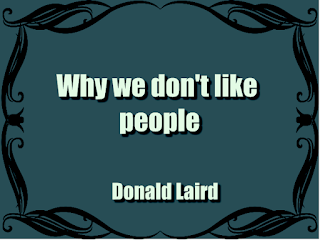 Introduction:
Personality is recognized by the average person as a group of qualities of considerable importance in every- day living and working. It is recognized by most scientists as a very nebulous, shifting thing, difficult to isolate and study. Personality cannot be inspected as can a balance sheet or an architect's drawing. It will not stand still to allow long-continued observation; it has to be caught on the run with a rapid lens. It cannot be reproduced by a studio portrait.
Only a motion picture can depict it adequately. Its elusiveness when one tries to pin it down for study has been one of the major reasons for the apparent neglect of the subject of personality by the world of psychological science. For in trying its practical wings psychology has largely neglected the measurement and control of human personality. Our experimental knowledge about intelligence and the learn- ing processes is voluminous and fairly complete. But our verified knowledge of the uniquely human qualities of personality is still incomplete and sketchy. Each year in the past half-decade, however, has seen an increasing amount of experimental work undertaken on normal personality in business and in social life.
This work is undoubtedly gaining momentum. Through its findings we may expect to have shortly a more complete knowledge of the side of human nature which, quite independent of his intelligence and skill, makes one man a demon for work, another a loafer, one a deadly bore, and the next "the life of the party". There is already enough verified information to be tremendously useful to the average person who seeks a better understanding of himself and his neighbors. But there are still gaps in our information that challenge further constructive experimentation.
Psychologists who are known principally for their work on intelligence testing have recognized the practical importance of the study of personality. Rudolf Partner, who has developed performance tests of intelligence, has written that "the time is now ripe for active investigations of the emotions, the character, the will and so forth, by means of mental test methods". Lewis M. Terman, who has done more than any other individual to promote intelligence tests, states that among the next steps in psychological investigations are studies of "emotional and volitional traits, and the combinations of these which are involved ... in normal variations in temperament". Terman himself is branching into this work. "Though intelligence is an asset in life, it does not by any means cover all the deficiencies of one's equipment for life," comments R. S. Woodworth of Columbia University. Although Dr. Woodworth has done little experimental work along these lines, his words are important because of the position of professional leadership which he occupies.
He continues, "The emotions need to be considered, the health and energy of the individual, his persistence, poise, sociability, and many characteristics which go to make up his personality". Many capable persons believe that success in their chosen work is assured by mere knowledge of the de- tails of the job, plus hard work. The narrowed view which springs from this ill-founded belief has kept many from achieving their real possibilities, either in business or in social activities. From many psychological laboratories in recent years has come more encouraging and positive knowledge that something besides hard work and simple job knowledge builds achievement. This newer knowledge about personal analysis is being widely used to help individuals overcome personality handicaps from which even the highest skill and ability suffer.
Author: Donald Anderson Laird
Publication Date:1933