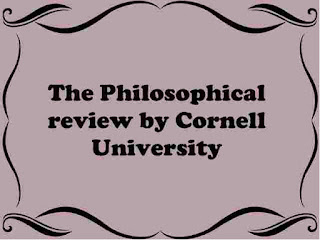 the present number the Review enters upon its second quarter-century. The articles which appear at this time have been written as contributions to a survey of the progress of philosophy in some of its main departments since the foundation of the Review in 1892.
A variety of circumstances, of which the most important is the continuation of the disastrous European war, has made it impossible to present at this time as complete an account of philosophical movements during this period as was originally planned and intended. So far as France and Germany are concerned, this most unfortunate gap in the present survey is to some extent filled by the very- able and detailed articles which the review has published from year to year on the progress of philosophy in these countries.
The articles contained in the present number are concerned mainly with philosophy in the English-speaking world, and to a large extent with the developments that have taken place in this country. Although no account is here given of the important developments which have occurred during the past few years in the field of Religion, and in the Philosophy of Law, these movements are of great importance and must be included in attempting to compare the position of philosophy and of philosophical study in the United States with that which it occupied;
I. twenty-five years ago. In the light of the retrospect and comparison furnished by the articles published on the present occasion, the prediction of President Schurman, the Founder of the Review, in the prefatory note with which the first number opened, that we were on the eve of a new philosophical movement in America, may appear to be confirmed.
A retrospect of the past, however, although it may bring encouragement and confidence, is not intended as an occasion for self-glorification. In America, it must lead us to recognize how much we owe in philosophy to Europe and to European writers. Our ambition is not to develop an independent American philosophy and science, but to cultivate these interests within our own soil so that we may have something to give in exchange for what we have received and are receiving. At the present time, when the conditions in the warring countries make it difficult or impossible for European scholars to carry on their work, a special responsibility rests upon their colleagues in America to maintain and strengthen the spirit of science and of free inquiry. This responsibility must be assumed, both for the sake of our own civilization, and in recognition of our obligation ate the countries from which we have hitherto drawn our chief in- intellectual support and stimulus. If the spirit of scholarship and inquiry is not carried forward, it becomes weakened and tends to disappear; if the conditions in the principal European countries have largely brought to a standstill the work of philosophical inquiry there, the loss must be made good, so far as this is possible, by more earnest efforts on the part of those who represent this subject in countries where these unfortunate conditions do not prevail. In the United States, the work that has already been accomplished in recent years may well support and inspire us in taking up this task.
At the time of the foundation of the Review, the Editor wrote in the first number: "There does not exist among us any periodical organ which concerns itself exclusively with Philosophy in general, or even any academy or a society which, in the absence of such an organ, might bring the philosophical minds of the nation into fruitful cooperation for the promotion of their common object.
There is neither an organ nor an organization of philosophical activity in America." Since the time when these sentences were written, more than one organ of philosophical activity has been established and maintained among us, and several philosophical associations have been organized and continue in active operation in different parts of this country. The progress which has been made in these directions is highly significant in the light of the duties and obligations which now confront American philosophical scholars.
In entering its second quarter-century the Review has no new policy to announce. It will continue, following the program adhered to from the beginning, to "aim at the organization, the diffusion, and the increase of philosophical knowledge," and will remain, in accordance with the terms of its original endowment, "an absolutely free organ, national and international, of general Philosophy."
Download 24 MB PDF ebook