The magic and mysteries of Mexico: or, The Arcane secrets and occult lore of the ancient Mexicans and Maya 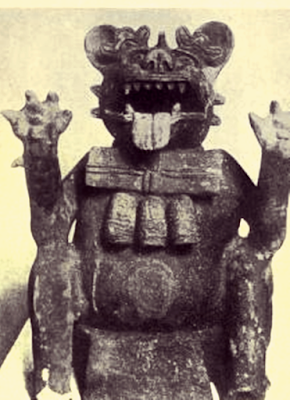 the first effort to include in one volume all that is known regarding the arcane knowledge and occult lore of the ancient Mexican peoples and their neighbours, the Maya of Central America and Yucatan, is the result of more than thirty-five years of research in a sphere which has richly repaid the writer by the companionship of its fascination, and which he hopes will prove equally absorbing to the reader who seeks passing amusement and to the serious student.
The book is so compiled as to be useful to both, popular in its general treatment, yet sufficiently authoritative in its sources and data to be of avail either to the practical anthropologist or the student of Mysticism.
The historical passages essential to the introduction of the main subject are necessarily sketchy, but embody sufficient information to permit the reader ignorant of Central American chronicles to approach the consideration of the curious knowledge of the more enlightened peoples of Isthmian America in the fields of pure Magic, Astrology, Witchcraft, Demonology and Symbolism. The chapters on the difficult question of Mexican and Maya Astrology have been reduced to a simplicity of presentation which, it is hoped, will render this vexed subject plain to everyone, and its basic import- ance to the whole survey of Mexican occult knowledge has been demonstrated with an equal desire for clarity.
That this astrological lore was inevitably accom- panied by a philosophy of dualism, recalling that of ancient Persia, is also shown, and that a system of initiation resembling that connected with Asiatic and European wisdom-religions was also in vogue in Central America is now for the first time suggested, and, it is hoped, adequately proved. The mystical books of the Mexicans and Maya are described and the relationships between the religions of these people and their magical beliefs fully dis- cussed. Nor have minor questions, such as popular superstitions, augury, and the use of charms and amulets been neglected. In fact, every effort has been put forth to render the volume as complete a treasury of the occult lore of Central America as our present acquaintance with the facts permits.
The writer has, above all, striven to preserve the romance inherent in the subject, and has tried to cast light on the darker places by an occasional appeal to fiction, but when such aid is invoked its imaginative character is duly indicated.
The Magic of old Mexico, although it closely resembles that of other lands, has distinct racial characteristics of its own, and is capable of illuminat- ing other systems through its peculiar preservation of what many of them have lost or cast aside.
Its inherent unity of idea with the arcane systems of the Old World makes it a valuable mine of analogy and comparison, even if the differences brought about by the environment seem to render it superficially distinctive. But, above all, its indwelling spirit of gloomy wonder and mystical exclusiveness perhaps reveal it as the most fascinating of the world's secret systems. it as the most fascinating of the world's secret systems.
James Lewis Thomas Chalmers Spence (25 November 1874 – 3 March 1955) was a Scottish journalist, poet, author, folklorist and occult scholar. Spence was a Fellow of the Royal Anthropological Institute of Great Britain and Ireland, and Vice-President of the Scottish Anthropological and Folklore Society.[1] He founded the Scottish National Movement.
Download PDF book 14.6 MB.