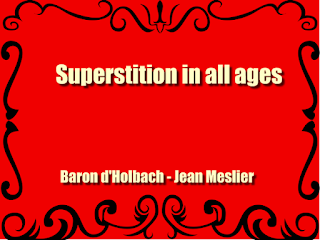 A Roman Catholic Priest, who at his death left as his “Last Will and Testament” this now-famous manuscript as contained herein, entitled
Excerpt
Pride and vanity always were and always will be the inherent vices of the priesthood. Is there anything that has a tendency to render men haughty and vain more than the assumption of exercising Heavenly power, of possessing a sacred character, of being the messengers of the Highest?
Are not these dispositions continually increased by the credulity of the people, by the deference and the respect of the sovereigns, by the immunities, the privileges, and the distinctions which the clergy enjoy?
The common man is, in every country, more devoted to his spiritual guides, whom he considers as Divine men than to his temporal superiors, whom he considers as ordinary men. Village priests enjoy more honor than the lord or the judge. A Christian priest believes himself far above a king or an emperor. A Spanish grandee having spoken hastily to a monk, the latter said to him, arrogantly, “Learn to respect a man who has every day your God in his hands and your queen at his feet."
D'Alembert, a philosopher of the eighteenth century, in his letter to Voltaire, dated Paris, March 31st, 1762, in speaking of Jean Meslier, after reading his "Last Will and testament" as contained in this Volume said. "It seems to me that we could inscribe upon the tombstone of this, curate." "Here lies a very honest priest, curate of a village in Champagne, who, in dying asks God's pardon for having been a Christian. '' Would it not have been ten thousand times better if D'Alembert had of said. It seems to me we should, in duty and full justice to blind suffering humanity, which is being imposed upon by religious fanaticism, and dogmatic theology, inscribe upon the tombstone of this curate
. "Here lies the body of a very honest and fearless priest, curate of a village in Champagne, who, before dying, gave to all the world, as his "Last Will and testament ' ' a Manuscript which will do great good by overcoming the puerile, mythical and superstitious teachings of theology and, the so-called Christian church." "Let us publish and circulate thousands of copies of this 'Testament' of the good priest; for, it must produce wonderful effects as its authenticity cannot be doubted any more than can his simplicity, honesty, and purity of soul." D'Alembert was, in his time, like many of today, his complaint was lukewarmness, for which he was reproached by the great Voltaire.
How many Jean Meslier's have we today, either in or out of the church? Not many. However, this Volume of which I am publishing a new edition will make a great impression and, should be read and respected by all who believe in truth, simplicity, and purity, which are the enemies of superstition, mysticism, religious fanaticism, theology, and dogmatic teachings.
And what great Testimony this Volume is, why is it not published and sold on a large scale in this and every country for; all who have read it pronounce it a very rare treasure. Think what it is, the testimony of a dying man, a good curate, and honest priest, who, while dying asks God's pardon for having been a Christian and taught the superstitious teaching of his church. Let all who read here thank this good curate, for this edifying "Testament," which, he gave to his parishioners and, all the world gratuitously in the hour of his death.
Every honest, true, man and woman will be benefited and enlightened by reading this Volume; for it is full of simplicity, candor, and truth and contains the true sentiments of a good curate, who humbly begs God's pardon for deceiving himself and having taught Romanism and Christianity.
Preface by Dr. L. W. Laurence.--Preface of the editor of the French edition of 1830.--Life of Jean Meslier, by Voltaire.--Common sense: Abstract of the Testament of John Meslier, by Voltaire
Author: Baron d'Holbach and Jean Meslier
Publication Date:1910