Philosophy of India by Heinrich Zimmer 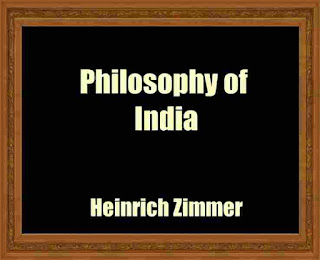 excerpt from the author's introduction
Dr. Heinrich Zimmer's posthumous chapters for a projected volume on the philosophies of India were found in various stages of completion. Those on the meeting of the Orient and Occident, the Indian philosophy of politics, Jainism, Sailkhya and Yoga, Vedanta, and Buddhahood had served as notes for a course of lectures delivered at Columbia University in the spring of 1942, while that on the Indian philosophy of duty had opened the course for the spring of 1943. But since hardly five weeks of the latter term had been completed when Dr. Zimmer was stricken with his final illness, his materials treating of the other phases of Indian thought remained in the uneven condition of mere jottings and preliminary drafts.

a single, orderly file, however, so that the problem of arranging them was not difficult. Lacunae could be filled from another bundle of manuscripts, as well as from recollected conversations. The editing of most of the chapters, therefore, went rather smoothly. But toward the end, the condition of the notes became so rough and spotty that the merely indicated frame had to be filled in with data drawn from other sources.
I have quoted only fron1 authors suggested either in Dr. Zimmer's outline or in his class assignments, and have named them all clearly in my footnotes. In the chapter on The Great Buddhist Kings, which is the first in which this problem arose, my chief authorities were The Cambridge History of India, Vol. I; E. B. Havell, The History of Aryan Rule in India from the Earliest Times to the Dctlth of Akbar; Ananda K. Coomera- Swamy, Buddhism and the Gos/Jel of Buddhism; T. W. Rhys Davids, Buddhism, Its History and Literature; S. Radhakrishnan, Indian Philosophy; Vincent A. Smith, Asoka, The Buddhist Emperor of India; and L. de la Vallee Poussin's article on the Buddhist Councils and Synods in Hastings' Encyclopaedia of Religion and Ethics. The notes for the chapter on Hinayana and Mah

Editor's Forward
Table of Contents
Part I. The Highest Good
I. The Meeting of East and West
1. The Roar of Awakening
2. The Steely Barb
3. The Claims of Science
4. The Four Aims of Life
5. Release and Progress
II. Tile Foundations of Indian Philosophy
1. Philosophy as a Way of Life
2. The Qualified Pupil
3. Philosophy as Power
4. "The Dying round the Holy Power"
5. Brahman
Part II. The Philosophies of Time
I. The Philosophy of Success
1. The World at War
2. The Tyrant State
3. Valor against Time
4. The Function of Treachery
5. Political Geometry
6. The Seven Ways to Approach a Neighbour
7. The Universal King
II. The Philosophy of Pleasure
III. Tile Philosophy of Duty
1. Caste and the Four Life-Stages
2. Satya
3. Satyagraha
4. The Palace of Wisdom
Part III. The Philosophies of Eternity
I. Jainism
1. Parsva
2. Jaina Images
3. The Maker of the Crossing
4. The Qualities of Matter
5. The Mask of the Personality
6. The Cosmic Man
7. The Jaina Doctrine of Bondage
8. The Jaina Doctrine of Release
9. The Doctrine of Maskarin Gosala
10. Man against Nature
II. Sankhya and Yoga
1. Kapila and Patanjali
2. Introvert-Concentration
3. The Hindrances
4. Integrity and Integration
5. Sankhya Psychology
III. Brahmanism
1. Veda
2. Upanisad
3. Bhagavad Gita
4. Vedanta
IV. Buddhism
1. Buddhahood
2. The Great Buddhist Kings
3. Hinayana and Mahayana
4. The Way of the Bodhisattva
5. The Great Delight
V. Tantra
1. Who Seeks Nirvana?
2. The Lamb, the Hero, and the Man-God
3. All the Goths within Us
Appendices
Appendix A: The Six Systems
Appendix B: Historical Summary
Bibliography
General Index and Sanskrit Index
Author: Heinrich Zimmer
Publication Date:1952