Europe since 1870 by Edward Raymond Turner 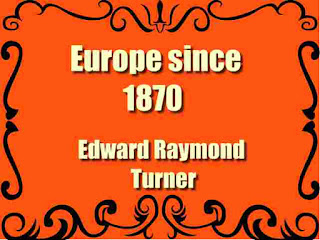 The author has attempted an outline of the history of Europe in the last fifty years, an era which began with the victories of the Germans in 1870 and ended with the destruction of their empire. No period can be more interesting to the present student of events.
The history of Europe during this half-century was, indeed, the larger part of the history of all of the world, for most of the world's population was controlled by European powers or else associated with them and directly affected by their fate.
The events of this time have touched the lives and the fortunes of most men and women now living. Successive years were thronged with vast developments and crowded with a multitude of persons and events, the story moving like some drama onto its tragic end. Whether we wish it or not, the present and the future must be filled with great problems arising from this era,
To understood only in connection with it. Into consideration of these problems, we here in the United States are destined to be ever more nearly drawn. Much of the writing was done in connection with the author's Europe, 1789-1 920; but considerable additions have been made and some portions are entirely new. If in spite of the larger space available here, he can be reproached with having left out a great many things, the answer must be that he has tried very hard to do this. In his own studies and reading, he has never had any lasting impression from a mere collection of details. He has,  therefore, striven to eliminate non-essential things wherever he could, and elsewhere subordinate the less important matters to consideration of principal tendencies and dominant ideas.
It is his highest ambition that in his pages maybe had a glimpse of the reality of departed years and something of the spirit that was in them. In respect of this, he hopes that some of the quotations at the chapter heads may seem of more worth than ten times their space filled with data and statistics; and that here and there a student reading them may feel the mysterious call to seek out the great books himself. The author is indebted to the courtesy of Messrs. G. P. Putnam's Sons for permission to quote at the beginning of the seventeenth chapter lines written by the late Lieutenant-Colonel John McCrae.