How to analyze people on sight through the science of human analysis; the five human types 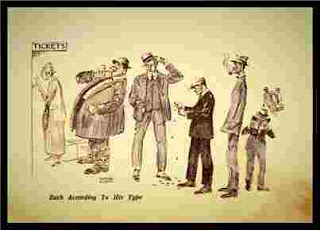 Modern science has proved that the fundamental traits of every individual are indelibly stamped in the shape of his body, head, face, and hands — an X-ray by which you can read the characteristics of any person on sight. jHE most essential thing in the world to any- individual is to understand himself. The next is to understand the other fellow.

For life is largely a problem of running your own car as it was built to be run, plus getting along with the other drivers on the highway. From this book, you are going to learn which type of car you are and the main reasons why you have not been getting the maximum of service out of yourself.

Also, you are going to learn the makes of other human cars, and how to get the maximum of co-operation out of them. This co-operation is vital to happiness and success. We come in contact with our fellow man in all the activities of our lives and what we get out of life depends, to an astounding degree, on our relations with him.
If you don't fit you must move or change your environment to fit you. If you can't change the environment and you won't move you will become a failure, just as tropical plants fail when transplanted to the Nevada desert.
Learn From the Sagebrush CL But there is something that grows and keeps on growing in the Nevada desert — the sagebrush. It couldn't move away and it couldn't change its waterless environment, so it did what you and I must do if we expect to succeed. It adapted itself to its environment, and there it stands, each little stalwart shrub a reminder of what even a plant can do when it tries!
Moving Won't Help Much C Human life faces the same alternatives that confront all other forms of life — of adapting itself to the conditions under which it must live or becoming extinct. You have an advantage over the sagebrush in that you can move from your city or state or country to another, but after all, that is not much of an advantage.
For though you may improve your situation slightly you will still find that in any civilized country the main elements of your problem are the same. Understand Yourself and Others d. So long as you live in a civilized or thickly populated community you will still need to understand your own nature and the natures of other people. No matter what you desire in life, other people's aims, ambitions, and activities constitute vital obstructions along your pathway.
You will never get far without the co-operation, confidence, and comradeship of other men and women. Primitive Problems CL It was not always so. And its recentness in human history may account for some of our blindness to this great fact. In primitive times people saw each other rarely and had much less to do with each other.
The human element was then not the chief problem. Their environmental problems had to do with such things as the elements, violent storms, extremes of heat and cold, darkness, the ever-present menace of wild beasts whose flesh was their food, yet who would eat them first unless they were quick in brain and body. Civilization's Changes Cl But all that is changed. Man has subjugated all other creatures and now walks the earth its supreme sovereign. He has discovered and invented and built until now we live in skyscrapers, talk around the world without wires, and by pressing a button turn darkness into daylight.

Download How to analyze people on sight PDF ebook