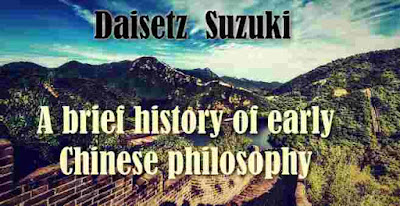 An authentic history of Chinese civilization dates back as early as three thousand years before the Christian era when the Three Rulers^ and the Five Kings ^ began to govern well-settled communities along the Yellow River. The " Shu-Ching,"^ one of the oldest books extant in China, contains among others some important documents issued by Tao and Shun/ whose imperial reigns flourished presumably in the twenty-fourth century before Christ.

Those documents furnish us with some interesting religious material, shedding light on the early Chinese conception of Nature, which, with only slight modifications, is stiUjgrevale^ at the present day. But the real awakening of philosophical inquiry in China must be said to be in the time when the Chou dynasty (1122-255 B.C.) first began to show symptoms of decline — that is, in the seventh century before Christ, though the Chinese intellect must have been active for a long time prior to this, the results of which, however imperfect and fragmentary, found their way in some of the " Ti Ching Appendices " and in Lao-tze's "Tao Te Ching."
Beginning with the seventh century B.C., a galaxy of philosophical and ethical thinkers led by Lao-tze and Confucius, continued most brilliantly to illumine, for some hundred years, the early stage of Chinese philosophy. It was as though one walked in springtime, after the confinement of a long, monotonous winter, into the field, where flowers of various hues and odors greet him on all sides. Thus, this epoch, covering about four hundred years, was one of the most glorious periods in the whole history of Chinese civilization; and because it was suddenly cut short by the Ch'in dynasty (221-206 B.C.), it is commonly known as the Ante-Ch'in period.
The Chinese mind may have developed later the higher power of reasoning, and made a deeper study of consciousness, but its range of intellectual activities was never surpassed in any other period. , later on, it gained in precision, it lost sadly in freedom, which sometimes turned to sheer wantonness. It had many problems to busy itself with at this awakening stage of national intellectual life.
The universe was yet new to the thinking mind, which was able to find problems to grapple with wheresoever its attention was directed • it was so plastic and so creative. But after this there set in a time for induration, whereby the intellectual blood was doomed to run along old and stiffened veins. An unhappy end came quite abruptly to this glorious Ante-Ch'in period.
When, in the year 221 B.C., the First Emperor (Shih Huang Ti) of the Ch'in dynasty succeeded in consolidating the small kingdoms and dukedoms of feudal China for the first time into one vast empire, he took the most drastic measures ever conceived by an absolute monarch to suppress the spirit of liberty which was just about to bloom. He would not tolerate a single thought that did not agree with his. He would not countenance scholars and thinkers who dared to assume an independent air and voice their opinions.
He silenced all criticism by burying his critics have and put an end to the discord of beliefs by burning all the books and documents'' that were not in sym- pathy with the new administration (213 B.C.). The effects of such radical measures were just what the Emperor desired. He suppressed all independence of thought and reduced the spirit of the nation to a comatose condition, which lasted for a millennium.* During these times, China produced not a single original thinker.
The cyclone was so destructive, leaving desolation in its wake, that people did not venture to build any new structure of thought; but were constantly endeavoring to recover what they had lost. They made diligent research among the literary remains. Whatever discoveries they made were carefully studied and commentaries were written by various hands. Those which could not be found, though their traditional existence was known, were even manufactured, and boldly appeared with the old labels on them. So, this period proved a fruitful season for literary forgery.