The Jungle by Upton Sinclair 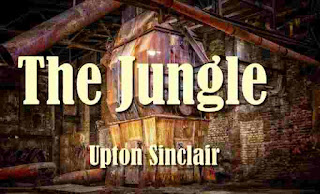 The story of Jurgis and his family who came from Lithuania to work in the slaughterhouses of Chicago in the early 20th century.
Upton Sinclair intended to expose "the inferno of exploitation [of the typical American factory worker at the turn of the 20th Century]", but the reading public fixed on food safety as the novel's most pressing issue. Sinclair admitted his celebrity arose "not because the public cared anything about the workers, but simply because the public did not want to eat tubercular beef".[
Sinclair's account of workers falling into rendering tanks and being ground along with animal parts into Durham's Pure Leaf Lard" gripped the public.
The poor working conditions, and exploitation of children and women along with men, were taken to expose the corruption in meatpacking factories. The British politician Winston Churchill praised the book in a review
One of the great social/protest novels of the 20th Century. 'The Jungle' is at once an indictment on the treatment of immigrants, poverty, American wage slavery, and the working conditions at Chicago's stockyards and meatpacking plants -- and simultaneously an exposé on the unsanitary conditions of the meat produced in the plants and led to Federal real food reform.