Marcus Aurelius Antoninus to himself: an English translation with an introductory study on stoicism and the last of the Stoics 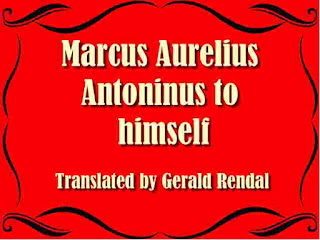 This book contains the meditations of Marcus Aurelius and other useful topics about Stoicism.

Excerpt :
English translations of Marcus Aurelius abound, from that of Meric Casaubon in 1634 to that of George Long first published in 1862. The choicest, alike in form and contents, is the Foulis Press edition executed by James Moor and Francis Hutcheson; and it better deserved reproduction than the looser version by Jeremy Collier. But none, in point of scholarship, reaches the level of modern requirement. In this last quarter of the century, the poets, historians, and philosophers of Greece have one after another, been given to English readers with scholarly precision and in becoming dress. And it seemed worthwhile to do the same for Marcus Aurelius. For purposes of education, the classical writers justly enjoy more vogue, and are better suited to train taste, intellect, and imagination; but by direct and permanent appeal to heart and conscience, without support from prescription or conventions, Marcus holds his own and lives.
Translations, essays, and the records of biographies all testify how simple and learned alike fall under his spell, and find in his Thoughts material that gives support to duty, courage under disappointment, consolation in sorrow, and calm amid the bustle of life. To Renan, they are 'the most human of all books; ' ' the gospel that will never grow old.' To Myers ' the life of Marcus ' — and the Thoughts, they only, are the life — ' will remain forever the normal high -watermark of the unassisted virtue of man.'
To Matthew Arnold 'the acquaintance of a man like Marcus Aurelius is an imperishable benefit; ' as ' the especial friend and comforter of clear-headed and scrupulous, yet pure-hearted and upward-striving men, in those ages most especially that walk by sight not by faith, but yet have no open vision.' In dealing with a writer such as this, in whom matter and mood are the things of prime importance, a translator's first duty is to make his English natural, clear, and readable; and, subject always to this demand, to reproduce, as far as may be, the manner, tone, and accent of the original. These are a part of idiosyncrasy; they give reality and life to this self-revelation of a soul. And despite certain obvious defects and obscurities of style, the task is not impossible.
That the style is crabbed ^ is in large measure true; but by no means, that ' it lacks physiognomy.' ^ Marcus wrote in Greek, because  Greek in the second century, like Latin in the ' Middle Ages, was the natural medium of philosophy and the language of his teachers. He acquired it as a foreign tongue, after his entrance upon manhood, and moves in it with some constraint and difficulty. Latinisms of syntax as well as of vocabulary are not infrequent, and even the habit of Greek composition strikes one as newly acquired and practiced. As the work progresses, and as the same trains of thought recur, utterance becomes readier, and he wields his instrument with more precision and dexterity. The heavy cramped vocabulary, the deadness of expression, the formless monotony of clauses, that characterize the first book, give way to more natural and simple movements; language.
This book contains the meditations of Marcus Aurelius and other useful topics about Stoicism
Contents:
Publication date:1912
Download Marcus Aurelius Antoninus to himself 5.3 MB PDF ebook