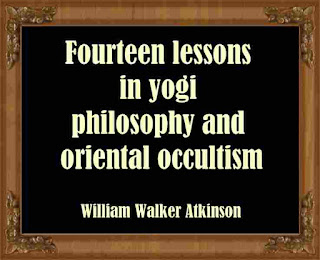 These lessons were originally issued in the form of monthly booklets, forming what was known as the " Correspondence Class Course of 1904." They met with such hearty support from the public and seemed to fill so well a need of students of Occultism and the Yogi Philosophy, that it was thought advisable to issue them in the present form.
We consider these lessons the simplest, most practical, and plainest presentation of the elementary principles of the Yogi Philosophy and Oriental Occultism ever issued.
They, of course, are elementary but seem to be just what the average student requires. Not only are they adapted to the requirements of the beginner, but much older and advanced students have written us that they have found great pleasure and much profit from again going over their kindergarten lessons in such plain form.
The author, following his usual custom, declined to write a preface for this book, holding to his oft-expressed idea that " truth should be self-evident, and in no manner dependent upon the personality of its teachers," he feeling that we had said all that he had to say in the lessons themselves, and not wishing to " intrude his personality " upon his readers. The reader's attention is directed to our notice of an Advanced Course on the same subject, appearing on the pages following reading matter.
It is with no ordinary feelings that we address ourselves to our students of the Yogi class of 1904. We see, as they perhaps do not, that too many of them this series of lessons will be as a seed planted in fertile soil, which will in due time put forth sprouts which will force their way gradually into the sunlight of consciousness, where they will put forth leaves, blossom, and fruit. Many of the fragments of truth which will be presented to you will not be recognized by you at this time, but in years to come you will recognize the verity of the impressions which will be conveyed to you in these lessons, and then, and then only, will you make these truths your own.
Download Fourteen lessons in yogi philosophy PDF ebook
Next Post Previous Post
No Comment
Add Comment
comment url
Occultism,Self-Help,William Walker Atkinson